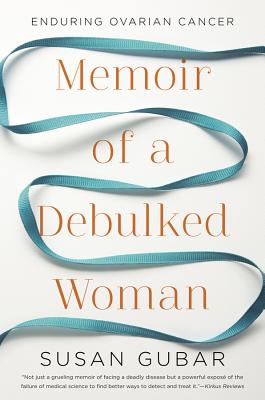 Memoir of a Debulked Woman (Hardcover)

In this moving memoir, a renowned feminist scholar explores the physical and psychological ordeal of living with ovarian cancer.

Diagnosed with ovarian cancer in 2008, Susan Gubar underwent radical debulking surgery, an attempt to excise the cancer by removing part or all of many organs in the lower abdomen. Her memoir mines the deepest levels of anguish and devotion as she struggles to come to terms with her body’s betrayal and the frightful protocols of contemporary medicine. She finds solace in the abiding love of her husband, children, and friends while she searches for understanding in works of literature, visual art, and the testimonies of others who suffer with various forms of cancer.

Ovarian cancer remains an incurable disease for most of those diagnosed, even those lucky enough to find caring and skilled physicians. Memoir of a Debulked Woman is both a polemic against the ineffectual and injurious medical responses to which thousands of women are subjected and a meditation on the gifts of companionship, art, and literature that sustain people in need.

Susan Gubar was awarded, with Sandra M. Gilbert, the Ivan Sandrof Lifetime Achievement Award by the National Book Critics Circle. She is the author of Memoir of a Debulked Woman and has authored and edited numerous works of criticism. She writes the monthly online New York Times column "Living with Cancer" and lives in Bloomington, Indiana.

Praise For Memoir of a Debulked Woman: Enduring Ovarian Cancer…

Staggering, searing… even the most skeptical and finicky reader—even the healthy reader, even the healthy male reader—will not put this book down… Ms. Gubar deserves the highest admiration for her bravery and honesty.
— Abigail Zuger

Delivered in a voice that is intelligent, feminist and devastatingly honest… Unlike many accounts of life with cancer, it is neither relentlessly upbeat nor melodramatic. Instead, it is straightforward, realistic and incredibly brave.
— Elsa Dixler

Starred review. True to her no-nonsense feminist roots, Gubar pulls no punches.... This raw narrative is as close to therapy and is written as close to the bone as one is likely to find among cancer memoirs. Even so, there is a certain beauty that only someone of Gubar’s prodigious abilities can impart to such a painful experience.

In this brave, honest book, Gubar grapples with the reality and symbolism of cancer. …[H]er tone is intimate, unsentimental, and darkly funny.

Not just a grueling memoir of facing a deadly disease but a powerful exposé of the failure of medical science to find better ways to detect and treat it.

Gubar’s passionate and brave polemic is critical reading for anyone concerned with the state of women’s health care in America.

An extraordinary testament to the human spirit—at least, to Susan Gubar’s indomitable spirit—a rare mixture of honesty, eloquence, humor, and passionate curiosity about the truth.... The ‘voice’ is so utterly intimate, the reader will find herself, or himself, drawn into sharing the author’s deepest thoughts, fears, and wishes. The memoir is a treasure-chest of wonderful, uncommon cultural allusions and lines of poetry; the reader feels honored to be in the presence of a first-rate, restless mind, being taken to a place of devastating clarity. There is pathos here, but not self-pity; amid the tragic and sorrowful, sudden flashes of wit.
— Joyce Carol Oates