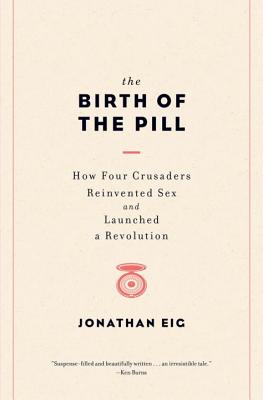 An engrossing and paramount chronicle… [Eig] brings his keen understanding of competition and outlawry, his affinity for rebels, and vigorous and vivid writing style to this dramatic tale of strong personalities, radical convictions, and world-altering scientific and social breakthroughs.
— Donna Seaman - Booklist (starred review)

A tale of scientific progress and social change as engaging and gripping as any suspense novel.
— Molly Langmuir - Elle

Fascinating… Weaving medical, corporate, and political history with rich biographical detail, Eig turns the history of the pill into a scientific suspense story full of profoundly human characters. The result is cultural history at its finest.
— Alan W. Petrucelli - Examiner.com

'The pill' is that rare invention that transforms the world. In this gripping book, Jonathan Eig tells how an unlikely group—Margaret Sanger, Katherine McCormick, Dr. Gregory Pincus, and Dr. John Rock—came together to achieve a scientific breakthrough and win acceptance for it in the face of intense opposition. The Birth of the Pill is vivid, compelling, and important.

A fascinating look into the evolution of medical practices, funding and ethics [and] an intricate portrait of how completely women’s reproductive lives are woven into our culture in disturbing and contradictory ways.
— Ashley Nelson - San Francisco Chronicle

The pill is utterly ordinary today. The story of how we got here is anything but.
— Hannah Levintova - Mother Jones

Narrative nonfiction at its best… A fascinating and thorough look at one of the most important innovations of the 20th century.
— Bookriot

Who knew that the history of oral contraceptives could rival a good procedural drama, with a scrappy group of believers racing against time?
— Meredith Counts - Bust

Absorbing… One of the book’s great strengths—accomplished through his smart choice of lead characters—is the depiction of how arduous it is to make real social change.
— Margaret Talbot - New Yorker

Aside from being a fascinating look into the evolution of medical practices, funding and ethics, Eig’s book is an intricate portrait of how completely women’s lives are weaved into our culture in disturbing and contradictory ways.
— San Francisco Chronicle

Detailed, compelling history… Eig does a remarkable job of keeping the science and the storytelling in harmony.
— Josh Modell - The Onion A.V. Club

Brilliant… [it] often reads like a thriller as funds runs out, clinical trials stall and politicians, including John F. Kennedy, shy away from the hot potato of birth control… its advocates deserve this vivid and life-affirming history.
— Joan Smith - The Guardian