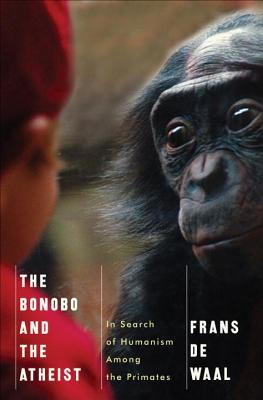 The Bonobo and the Atheist

In Search of Humanism Among the Primates

In this lively and illuminating discussion of his landmark research, esteemed primatologist Frans de Waal argues that human morality is not imposed from above but instead comes from within. Moral behavior does not begin and end with religion but is in fact a product of evolution.

For many years, de Waal has observed chimpanzees soothe distressed neighbors and bonobos share their food. Now he delivers fascinating fresh evidence for the seeds of ethical behavior in primate societies that further cements the case for the biological origins of human fairness. Interweaving vivid tales from the animal kingdom with thoughtful philosophical analysis, de Waal seeks a bottom-up explanation of morality that emphasizes our connection with animals. In doing so, de Waal explores for the first time the implications of his work for our understanding of modern religion. Whatever the role of religious moral imperatives, he sees it as a “Johnny-come-lately” role that emerged only as an addition to our natural instincts for cooperation and empathy.


But unlike the dogmatic neo-atheist of his book’s title, de Waal does not scorn religion per se. Instead, he draws on the long tradition of humanism exemplified by the painter Hieronymus Bosch and asks reflective readers to consider these issues from a positive perspective: What role, if any, does religion play for a well-functioning society today? And where can believers and nonbelievers alike find the inspiration to lead a good life?

Rich with cultural references and anecdotes of primate behavior, The Bonobo and the Atheist engagingly builds a unique argument grounded in evolutionary biology and moral philosophy. Ever a pioneering thinker, de Waal delivers a heartening and inclusive new perspective on human nature and our struggle to find purpose in our lives.

Praise For The Bonobo and the Atheist: In Search of Humanism Among the Primates…

Frans de Waal’s new book carries the important message that human kindness is a biological feature of our species and not something that has to be imposed on us by religious teaching.
— Desmond Morris, author of The Naked Ape

De Waal’s decades of patient work documenting the ‘building blocks’ of morality in other animals has revolutionized not just primatology but moral psychology. By revealing our commonalities with other species, he gives us more compassion for them and also for ourselves. It’s impossible to look an ape in the eye and not see oneself, de Waal tells us, and this beautifully written book is one long riveting gaze.
— Jonathan Haidt, author of The Righteous Mind: Why Good People Are Divided by Politics and Religion

Frans de Waal offers us a wealth of inspiring observations from the animal realm, combined with thoughtful reflections on the evolution of morality. He makes a convincing case for the natural foundations of a secular ethics that is fully independent of religion without being dogmatically against it.
— Matthieu Ricard, Buddhist monk, scientist, and author of Happiness and The Quantum and the Lotus

The perpetual challenge to atheists is that moral behavior requires religion—all that prevents tsunamis of depravity is a deity or two, some nice hymns, and the threat of hellfire and damnation. De Waal shows that human morality is deeply rooted in our primate legacy, long predating the invention of that cultural gizmo called religion. This is an immensely important book by one of our most distinguished thinkers.
— Robert Sapolsky, author of Why Zebras Don't Get Ulcers and Monkeyluv

A well-composed argument for the biological foundations of human morality.
— Kirkus Reviews

This is a writer marshaling the evidence of his life, particularly his life as a scientist, to express a passionately held belief in the possibility of a more compassionate society.
— Meehan Crist - New Republic

A primatologist who has spent his career studying chimpanzees and bonobos, two of humanity’s closest living relatives, Mr. de Waal draws on a lifetime of empirical research. His data provides plenty of evidence that religion is not necessary in order for animals to display something that looks strikingly like human morality.
— The Economist

Frans de Waal, author of Mama's Last Hug and Are We Smart Enough to Know How Smart Animals Are?, is a professor of psychology at Emory University and director of the Living Links Center at the Yerkes National Primate Research Center. He lives in Atlanta, Georgia.