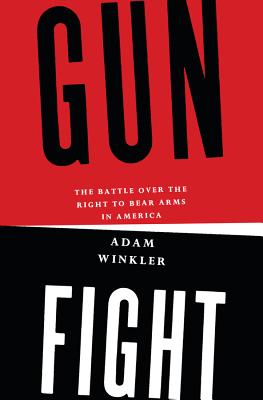 The Battle over the Right to Bear Arms in America

A provocative history that reveals how guns—not abortion, race, or religion—are at the heart of America's cultural divide.

Gunfight promises to be a seminal work in its examination of America's four-centuries-long political battle over gun control and the right to bear arms. In the tradition of Gideon's Trumpet, Adam Winkler uses the landmark 2008 case District of Columbia v. Heller, which invalidated a law banning handguns in the nation's capital, as a springboard for a groundbreaking historical narrative. From the Founding Fathers and the Second Amendment to the origins of the Klan, ironically as a gun control organization, the debate over guns has always generated controversy. Whether examining the Black Panthers' role in provoking the modern gun rights movement or Ronald Reagan's efforts to curtail gun ownership, Winkler brilliantly weaves together the dramatic stories of gun rights advocates and gun control lobbyists, providing often unexpected insights into the venomous debate that now cleaves our nation.


Praise For Gunfight: The Battle over the Right to Bear Arms in America…

In Gunfight: The Battle Over the Right to Bear Arms in America, Adam Winkler tells the remarkable story of the rag-tag group of libertarian lawyers who challenged nearly a century of lower-court precedent to bring a clear-cut Second Amendment case to the Supreme Court. This is an engaging and provocative legal drama about the six-year courtroom journey of District of Columbia v Heller and a fascinating survey of the misunderstood history of guns and gun control in America.

A succinct and fascinating introduction to the legal and historical issues at the heart of the gun debate.
— Eric Arnesen, professor of history at George Washington University and fellow at the Woodrow Wilson International Center for Scholars - Chicago Tribune

Adam Winkler is a professor at UCLA School of Law, where he specializes in American constitutional law. His scholarship has been cited by the Supreme Court of the United States and his writing has appeared in the New York Times, Wall Street Journal, Washington Post, Los Angeles Times, New Republic, Atlantic, Slate, and Scotusblog.
Loading...
or
Not Currently Available for Direct Purchase