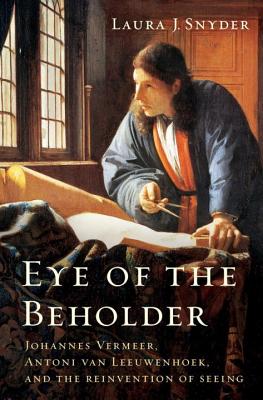 Eye of the Beholder

Johannes Vermeer, Antoni van Leeuwenhoek, and the Reinvention of Seeing

The remarkable story of how an artist and a scientist in seventeenth-century Holland transformed the way we see the world.

On a summer day in 1674, in the small Dutch city of Delft, Antoni van Leeuwenhoek—a cloth salesman, local bureaucrat, and self-taught natural philosopher—gazed through a tiny lens set into a brass holder and discovered a never-before imagined world of microscopic life. At the same time, in a nearby attic, the painter Johannes Vermeer was using another optical device, a camera obscura, to experiment with light and create the most luminous pictures ever beheld.

“See for yourself!” was the clarion call of the 1600s. Scientists peered at nature through microscopes and telescopes, making the discoveries in astronomy, physics, chemistry, and anatomy that ignited the Scientific Revolution. Artists investigated nature with lenses, mirrors, and camera obscuras, creating extraordinarily detailed paintings of flowers and insects, and scenes filled with realistic effects of light, shadow, and color. By extending the reach of sight the new optical instruments prompted the realization that there is more than meets the eye. But they also raised questions about how we see and what it means to see. In answering these questions, scientists and artists in Delft changed how we perceive the world.

In Eye of the Beholder, Laura J. Snyder transports us to the streets, inns, and guildhalls of seventeenth-century Holland, where artists and scientists gathered, and to their studios and laboratories, where they mixed paints and prepared canvases, ground and polished lenses, examined and dissected insects and other animals, and invented the modern notion of seeing. With charm and narrative flair Snyder brings Vermeer and Van Leeuwenhoek—and the men and women around them—vividly to life. The story of these two geniuses and the transformation they engendered shows us why we see the world—and our place within it—as we do today.

Praise For Eye of the Beholder: Johannes Vermeer, Antoni van Leeuwenhoek, and the Reinvention of Seeing…

Beautifully evokes the ambience of late-seventeenth-century Delft… revelatory about Vermeer’s aims and methods, helping to explain what is so mesmeric about his work.
— Philip Ball - Nature

Vivid and persuasive…. This poetic, inclusive approach to popular science writing makes Eye of the Beholder an unfailing pleasure to read.

Irresistible…. [Snyder] ingeniously explores the minutiae of her subjects’ lives to reveal sweeping changes in how their world was understood—ones that still resonate today.
— Jonathon Keats - New Scientist

Absorbing…. Snyder takes us back through time, beyond the reflections and shadows, to the very heart of Vermeer’s art.
— Roma Tearne - The Independent [UK]

Laura Snyder is both a masterly scholar and a powerful storyteller. In Eye of the Beholder, she transports us to the wonder-age of seventeenth-century Holland, as new discoveries in optics were shaping the two great geniuses of Delft—Vermeer and van Leeuwenhoek—and changing the course of art and science forever. A fabulous book.

Eye of the Beholder is a thoughtful elaboration of the modern notion of seeing. Laura J. Snyder delves into the seventeenth century fascination with the tools of art and science, and shows how they came together to help us make sense of what is right in front of our eyes.

— Russell Shorto, author of Amsterdam: A History of the World's Most Liberal City

Laura J. Snyder's Eye of the Beholder is an irresistible invitation into the lives and work of Vermeer and van Leeuwenhoek and how the extraordinary intersection of their genius in Seventeenth century Delft awakened our perceptions of how we see the world. It's a wonderful and vivid book.

As in The Philosophical Breakfast Club, Laura Snyder tells the tale of a crucial moment in human discovery by focusing on the interplay between the personalities involved, in this case the great Dutch artist Johannes Vermeer and the amateur scientist Antoni van Leeuwenhoek, best known for his miniature microscopes and his pioneering work as a microbiologist. This was an age when artists as well as scientists explored nature, occasionally with the same technical means, such as optical devices. This delightful book is solidly researched but reads like a novel—and a good one at that!

Fulbright scholar Laura J. Snyder is the author of The Philosophical Breakfast Club, a Scientific American Notable Book, winner of the 2011 Royal Institution of Australia poll for Favorite Science Book, and an official selection of the TED Book Club. She is also the author of Eye of the Beholder and Reforming Philosophy. Snyder writes about science and ideas for the Wall Street Journal. She is a professor at St. John’s University and lives in New York City.
Loading...
or
Not Currently Available for Direct Purchase