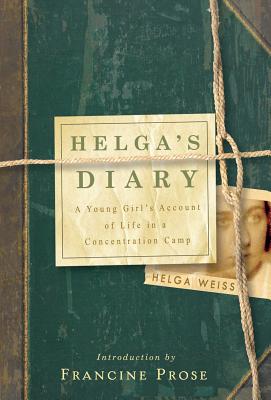 The remarkable diary of a young girl who survived the Holocaust—appearing in English for the first time.

In 1939, Helga Weiss was a young Jewish schoolgirl in Prague. Along with some 45,000 Jews living in the city, Helga’s family endured the first wave of the Nazi invasion: her father was denied work; she was forbidden from attending regular school. As Helga witnessed the increasing Nazi brutality, she began documenting her experiences in a diary.


In 1941, Helga and her parents were sent to the concentration camp of Terezín. There, Helga continued to write with astonishing insight about her daily life: the squalid living quarters, the cruel rationing of food, and the executions—as well as the moments of joy and hope that persisted in even the worst conditions.

In 1944, Helga and her family were sent to Auschwitz. Before she left, Helga’s uncle, who worked in the Terezín records department, hid her diary and drawings in a brick wall. Miraculously, he was able to reclaim them for her after the war.

Of the 15,000 children brought to Terezín and later deported to Auschwitz, only 100 survived. Helga was one of them. Reconstructed from her original notebooks, the diary is presented here in its entirety. With an introduction by Francine Prose, a revealing interview between translator Neil Bermel and Helga, and the artwork Helga made during her time at Terezín, Helga's Diary stands as a vivid and utterly unique historical document.

Weiss' moving eyewitness portrait adds a deepening to the understanding of the Jews' plight during this horrific period in history.
— Kirkus Reviews

The most moving Holocaust diary published since Anne Frank.
— The Telegraph

As the number of Holocaust survivors dwindles dramatically, the potency of first-hand accounts increases with each passing year.... Illustrated with family photographs and her own paintings and drawings, Helga’s Diary serves as a remarkable testament to her horrific journey and the ultimate resiliency of youth. Since so few of the approximately 15,000 children interred in Terezin survived, Helga’s Diary, like the collective reminiscences in Hannelore Brenner’s The Girls of Room 28 (2009), must speak for all the young voices that were prematurely stifled.

Page after page of writing that candidly, expertly, showcases humanity at its best and its worst.
— Malcolm Forbes - The Rumpus