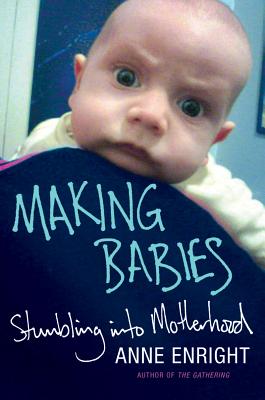 "Much of the book is astonishingly funny; the rest would break your heart." —Colm Tóibín


Anne Enright is one of the most acclaimed novelists of her generation. The Gathering won the 2007 Man Booker Prize, and her follow-up novel, The Forgotten Waltz, garnered universal praise for her luminous language and deep insight into relationships.

Now, in Making Babies, Enright offers a new kind of memoir: an unapologetic look at the very personal experience of becoming a mother. With a refreshing no-nonsense attitude, Enright opens up about the birth and first two years of her children’s lives. Enright was married for eighteen years before she and her husband Martin, a playwright, decided to have children. Already a confident, successful writer, Enright continued to work in her native Ireland after each of her two babies was born. While each baby slept, those first two years of life, Enright wrote, in dispatches, about the mess, the glory, and the raw shock of motherhood.

Here, unfiltered and irreverent, are Enright’s keen reactions to the pains of pregnancy, the joys of breast milk, and the all-too-common pressures to be the “perfect” parent. Supremely observant and endlessly quizzical, Enright is never saccharine, always witty, but also deeply loving.

Already a bestseller in the UK, Making Babies brings Enright’s autobiographical writing to American readers for the first time. Tender and candid, it captures beautifully just what it’s like for a working woman to become a mother. The result is a moving chronicle of parenthood from one of the most distinctive and gifted authors writing today.

Keenly observed and gorgeously written… one of the best books ever on the experience of being a mother. Because it’s an experience so many of us share, Enright’s fearless and funny inquiry into why motherhood feels the way it does is not only entertaining, it’s deeply consoling.
— Boston Sunday Globe

At once a memoir, a reference manual and a cautionary tale about the conflicting emotions of parenthood…. For those who’ve grown weary of hyped-up superparents and their relentless positivity, [Enright’s] candor is welcome.
— More

[A] field guide to both the romance and reality of what it means to create and care for other humans, delivered by narration that evinces deep sincerity and the purest happiness.
— The Dallas Morning News