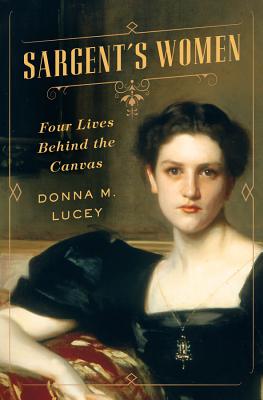 Four Lives Behind the Canvas

"Sargent’s Women has a distinct elegance and potency—Lucey’s writing propels you forward, straight to the heart of the story, along the vibrant ties that linked this fascinating artist to the women he made infamous." —Christene Barberich, global editor-in-chief and cofounder, Refinery29

In this seductive, multilayered biography, based on original letters and diaries, Donna M. Lucey illuminates four extraordinary women painted by the iconic high-society portraitist John Singer Sargent. With uncanny intuition, Sargent hinted at the mysteries and passions that unfolded in his subjects’ lives.

Elsie Palmer traveled between her father’s Rocky Mountain castle and the medieval English manor house where her mother took refuge, surrounded by artists, writers, and actors. Elsie hid labyrinthine passions, including her love for a man who would betray her. As the veiled Sally Fairchild—beautiful and commanding—emerged on Sargent’s canvas, the power of his artistry lured her sister, Lucia, into a Bohemian life. The saintly Elizabeth Chanler embarked on a surreptitious love affair with her best friend’s husband. And the iron-willed Isabella Stewart Gardner scandalized Boston society and became Sargent’s greatest patron and friend.

Like characters in an Edith Wharton novel, these women challenged society’s restrictions, risking public shame and ostracism. All had forbidden love affairs; Lucia bravely supported her family despite illness, while Elsie explored Spiritualism, defying her overbearing father. Finally, the headstrong Isabella outmaneuvered the richest plutocrats on the planet to create her own magnificent art museum.

These compelling stories of female courage connect our past with our present—and remind us that while women live differently now, they still face obstacles to attaining full equality.


Praise For Sargent's Women: Four Lives Behind the Canvas…

In Sargent’s Women . . . [Lucey] does . . . what she does best, creating a rollicking snow globe version of an almost unimaginable world of wealth, crackpot notions of self-improvement and high-flying self-indulgence.

[A] lyrical meditation on life, love, and art in the Gilded Age. . . . Sargent’s Women abounds with dazzling characters in atmospheric settings. . . . As rich as [Sargent’s] portraits are, the textural evidence in which Ms. Lucey ensnares them is finer still.

[Lucey] delivers the goods, disclosing the unhappy or colorful lives that Sargent sometimes hinted at but didn’t spell out. . . . Sargent’s Women is a good read . . . [and its] chatty pleasures are considerable.

Sargent’s Women has a distinct elegance and potency—Lucey’s writing propels you forward, straight to the heart of the story, along the vibrant ties that linked this fascinating artist to the women he made infamous.

Like characters from the writings of Edith Wharton, [the women in this book] were smart, passionate, willful, adventurous and striking-looking—particularly when immortalized by John Singer Sargent. . . . Lucey’s prose is invitingly conversational and quick-flowing. Her character sketches are colorful and she is not, thank goodness, above conveying some wonderfully catty gossip.
— Alexander C. Kafka

Choosing four striking Sargent portraits of wealthy, cosmopolitan American women, Lucey vividly reveals the hidden truths of their tumultuous lives, while also succinctly telling the artist’s own intriguing story. . . . Lucey’s superlative group portrait, rendered in crystal-clear prose, is spring-fed by . . . her keen insights into what drove these women to break out of their gilded cages.

[Lucey’s] narrative is engaging and elegant, set in a rich cultural and social framework that insightfully reflects the era.

Donna M. Lucey is the author of the New York Times best-selling Archie and Amélie and other books, the recipient of two National Endowment for the Humanities grants, and a 2017 writer-in-residence at Edith Wharton’s The Mount. The media editor at the Virginia Foundation for the Humanities, she lives in Charlottesville.
or support indie stores by buying on