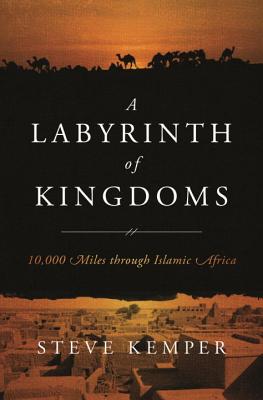 A Labyrinth of Kingdoms

A true story that rivals the travels of Burton or Stanley for excitement, and surpasses them in scientific achievements.

In 1849 Heinrich Barth joined a small British expedition into unexplored regions of Islamic North and Central Africa. One by one his companions died, but he carried on alone, eventually reaching the fabled city of gold, Timbuktu. His five-and-a-half-year, 10,000-mile adventure ranks among the greatest journeys in the annals of exploration, and his discoveries are considered indispensable by modern scholars of Africa.

Yet because of shifting politics, European preconceptions about Africa, and his own thorny personality, Barth has been almost forgotten. The general public has never heard of him, his epic journey, or his still-pertinent observations about Africa and Islam; and his monumental five-volume Travels and Discoveries in North and Central Africa is rare even in libraries. Though he made his journey for the British government, he has never had a biography in English. Barth and his achievements have fallen through a crack in history.


Praise For A Labyrinth of Kingdoms: 10,000 Miles through Islamic Africa…

A spirited reconstruction of the arduous five-year trek into Central Africa by Heinrich Barth (1821–1865), a German scientist exploring for England.... A nicely rounded literary study of an intrepid explorer undone by the cultural biases of the time.
— Kirkus Reviews

...He approached his expedition with an open mind and a willingness to engage with those around him regardless of their social status. Barth’s insights into the commonalities that exist among different cultures remain relevant today.
— Booklist

Steve Kemper’s elegant, richly rewarding biography should go a long way toward correcting [Barth’s obscurity]. On one level, the book is a superb chronicle of Barth’s travels, from the harrowing heat and physical danger to the dazzling diversity of people he encountered on his path. It’s also an astute character study of a relentlessly curious scientific personality.
— Kate Tuttle - Boston Globe

Sometimes a book grabs you by the throat and won’t let you put it down. I recently experienced that with Steve Kemper’s A Labyrinth of Kingdoms: 10,000 Miles Through Islamic Africa.

— Pamela Toler, author of History in the Margins

If you have an ounce of historical exploratory curiosity in your veins, course through this forgotten tale. Timbuktu awaits.
— Robert F. Wells - Expedition News