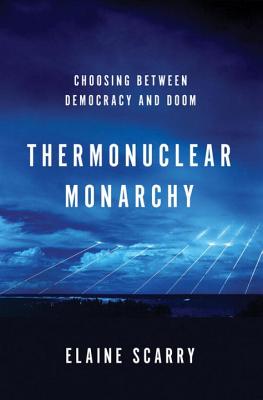 Choosing Between Democracy and Doom

From one of our leading social thinkers, a compelling case for the elimination of nuclear weapons.

During his impeachment proceedings, Richard Nixon boasted, "I can go into my office and pick up the telephone and in twenty-five minutes seventy million people will be dead." Nixon was accurately describing not only his own power but also the power of every American president in the nuclear age.


Presidents Eisenhower, Kennedy, Johnson, and Nixon each contemplated using nuclear weapons—Eisenhower twice, Kennedy three times, Johnson once, Nixon four times. Whether later presidents, from Ford to Obama, considered using them we will learn only once their national security papers are released.

In this incisive, masterfully argued new book, award-winning social theorist Elaine Scarry demonstrates that the power of one leader to obliterate millions of people with a nuclear weapon—a possibility that remains very real even in the wake of the Cold War—deeply violates our constitutional rights, undermines the social contract, and is fundamentally at odds with the deliberative principles of democracy.

According to the Constitution, the decision to go to war requires rigorous testing by both Congress and the citizenry; when a leader can single-handedly decide to deploy a nuclear weapon, we live in a state of “thermonuclear monarchy,” not democracy.

The danger of nuclear weapons comes from potential accidents or acquisition by terrorists, hackers, or rogue countries. But the gravest danger comes from the mistaken idea that there exists some case compatible with legitimate governance. There can be no such case. Thermonuclear Monarchy shows the deformation of governance that occurs when a country gains nuclear weapons.

In bold and lucid prose, Thermonuclear Monarchy identifies the tools that will enable us to eliminate nuclear weapons and bring the decision for war back into the hands of Congress and the people. Only by doing so can we secure the safety of home populations, foreign populations, and the earth itself.

Praise For Thermonuclear Monarchy: Choosing Between Democracy and Doom…

The premise of this book is as relevant as it is horrifying, that the power to inflict great harm doesn’t belong to those that it supposedly protects. I congratulate Elaine Scarry on her intellectual courage and moral clarity and in proposing the only possible way out.
— Marcelo Gleiser, author of A Tear at the Edge of Creation

A really remarkable work, ranging across ethics, law and politics to pose genuinely radical challenges to the confused and potentially lethal systems that pass for democracy in our world. A painfully timely intervention.
— Rowan Williams, Master of Magdalene College, Cambridge and former Archbishop of Canterbury

Elaine Scarry offers a coruscating critique of current policies, arguing that they are antithetic to the spirit of the U.S. constitution, and indeed to basic democratic principles. This eloquent and scholarly book offers a compelling case for swifter progress toward their elimination.
— Martin Rees, astronomer royal of England

Even someone unpersuaded by Elaine Scarry’s constitutional analysis cannot avoid being gripped by her stark depiction of how utterly incompatible our eighteenth-century constitutional structure and the social contract it embodies are with our twenty-first-century weapons of mass destruction, weapons that can annihilate tens of millions of human souls in the blink of an eye and at the whim of a single individual, consulting with no one. A sober and haunting meditation on this tension between our institutions and our capacities, Scarry’s book requires any thoughtful reader to revisit the basic postulates and the deepest human purposes of our system of government.
— Laurence H. Tribe, professor of constitutional law, Harvard Law School

A few years ago General Lee Butler, former head of the U.S. Strategic Command, condemned the ‘faith in nuclear weapons’ to which his life had been wrongly dedicated and the ‘breathtaking audacity’ in maintaining them when ‘we should stand trembling in the face of our folly and united in our commitment to abolish its most deadly manifestations.’ In this fascinating study, Elaine Scarry adds rich historical, philosophical, literary, and legal depth to Butler’s grim warnings, with novel and provocative insights. That we have escaped disaster so far is a near miracle. Scarry’s remarkable contribution should inspire us to abolish this colossal folly.
— Noam Chomsky

Scarry’s assault on the reigning complacency about nuclear weapons rests on her belief in the capacity of an interpretation to reconfigure the world.
— Nathan Schneider - Chronicle of Higher Education

Thermonuclear Monarchy is a work of deadly serious political science by an analyst dwelling on the constitutional implications of giving a democratically elected president sovereign-like autocracy.

Elaine Scarry is the Cabot Professor of Aesthetics and the General Theory of Value at Harvard University. Her book The Body in Pain was a National Book Critics Circle Award finalist. She lives in Cambridge, Massachusetts.
Loading...
or
Not Currently Available for Direct Purchase