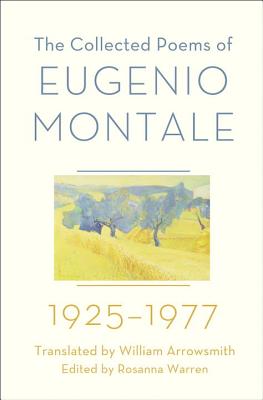 The Collected Poems of Eugenio Montale

A majestic translation of one of the Nobel Prize-winning masters of twentieth-century poetry.

The Collected Poems of Eugenio Montale publishes for the first time in English William Arrowsmith’s pellucid translations of Poetic Diary 1971, 1972, and the Poetic Notebook, as well as his previously published translations of four volumes: Cuttlefish Bones, The Occasions, The Storm and Other Things, and Satura. With the wide range of Montale’s poetry at last available to the English reader, this collection reveals Montale to be the greatest Italian poet of the twentieth century.

William Arrowsmith was a renowned translator and classics scholar.

Rosanna Warren is the author of six poetry collections and a volume of critical essays. She has won the Lamont Poetry Prize and has received awards from the American Academy of Arts and Letters and the Guggenheim Foundation, among other honors. She teaches at the University of Chicago and lives in Chicago.
Loading...
or
Not Currently Available for Direct Purchase