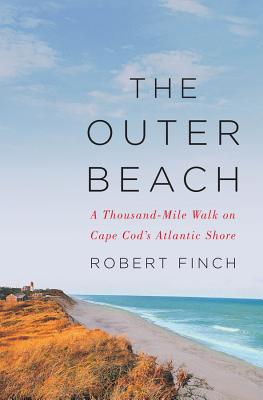 A poignant, candid chronicle of a beloved nature writer’s fifty-year relationship with an iconic American landscape.

Those who have encountered Cape Cod—or merely dipped into an account of its rich history—know that it is a singular place. Robert Finch writes of its beaches: “No other place I know sears the heart with such a constant juxtaposition of pleasure and pain, of beauty being born and destroyed in the same moment.” And nowhere within its borders is this truth more vivid and dramatic than along the forty miles of Atlantic coast—what Finch has always known as the Outer Beach. The essays here represent nearly fifty years and a cumulative thousand miles of walking along the storied edge of the Cape’s legendary arm.

Finch considers evidence of nature’s fury: shipwrecks, beached whales, towering natural edifices, ferocious seaside blizzards. And he ponders everyday human interactions conducted in its environment with equal curiosity, wit, and insight: taking a weeks-old puppy for his first beach walk; engaging in a nocturnal dance with one of the Cape’s fabled lighthouses; stumbling, unexpectedly, upon nude sunbathers; or even encountering out-of-towners hoping an Uber will fetch them from the other side of a remote dune field.

Throughout these essays, Finch pays tribute to the Outer Beach’s impressive literary legacy, meditates on its often-tragic history, and explores the strange, mutable nature of time near the ocean. But lurking behind every experience and observation—both pivotal and quotidian—is the essential question that the beach beckons every one of its pilgrims to confront: How do we accept our brief existence here, caught between overwhelming beauty and merciless indifference?

Finch’s affable voice, attentive eye, and stirring prose will be cherished by the Cape’s staunch lifers and erstwhile visitors alike, and strike a resounding chord with anyone who has been left breathless by the majestic, unrelenting beauty of the shore.

Praise For The Outer Beach: A Thousand-Mile Walk on Cape Cod's Atlantic Shore…

Lovely and fortifying....As Mr. Finch points out, geologists estimate that Cape Cod will disappear in around 6,000 years....Until it goes, may there continue to be writers as good as Mr. Finch to commemorate it.
— Sam Sacks - Wall Street Journal

[Finch] is a keen and passionate observer....[he] artfully conveys what is, at heart, so stirring about the beach: how its beauty and magisterial power cause us to ponder the larger things in life and drive home our place in the universe.
— New York Times Book Review

Finch is today's best, most perceptive Cape Cod writer in a line extending all the way back to Henry David Thoreau.
— Steve Donoghue - Christian Science Monitor

A lovable book, full of high-leaping energy and charm. And Finch is great company—wonderfully informed, observant, and funny. He gives us his leisured and warm friendship; he gives us his humor and enthusiasm. What astounding sights he meets just by wandering!
— Annie Dillard

A master stylist, Finch is both a naturalist and a philosopher…This beautiful book is to be savored in small bites by anyone yet to visit the Cape, and swallowed whole by those who love it as much as Finch does.
— Library Journal

The author chose John Keats’ remark, ‘Description is always bad,’ as an epigraph for the book, but that comment surely does not apply to the precision and sheer loveliness of Finch’s prose….Vivid and graceful reflections on water and wind, shifting sands, and the inevitability of change.
— starred review - Kirkus Reviews

In rich and subtle detail, his portraits of the beach capture its ever-shifting elements.…Finch draws lessons on the impermanence of life from this settlement built on sand, lessons that resonate with his evocative panorama of restive natural forces in an iconic setting.
— Publishers Weekly

Every step of this fifty-year journey is a lesson, a poem, a hypothesis, a paean, a keen stroke in a vivid seascape, a treatise, a fresh verse in an ongoing elegy. The Outer Beach is one of the most moving books about Cape Cod ever written, and Robert Finch a genial, prickly, funny, exact, and generous companion. Talk about a beach book!

— Bill Roorbach, author of Temple Stream, Life Among Giants, and The Girl of the Lake

With a scientist’s clarity and a storyteller’s wit, [Finch] tells of excursions taken over nearly half a century… His prose carries the tang of salt, the gossip of gulls, the hiss of wind and surf. Open this book and you can venture out with him in all weathers, all seasons—beachcombing, storm-chasing, birdwatching—all the while musing on the primordial dance between land and sea, and on the resilient creatures that live along the edge.
— Scott Russell Sanders, author of Dancing in Dreamtime

Robert Finch has lived on Cape Cod for forty years, currently in Wellfleet, Massachusetts. He is the author of seven collections of essays, most recently of his radio scripts for his weekly commentary, “A Cape Cod Notebook,” on the Cape and Islands NPR Station, WCAI.
Loading...
or support indie stores by buying on