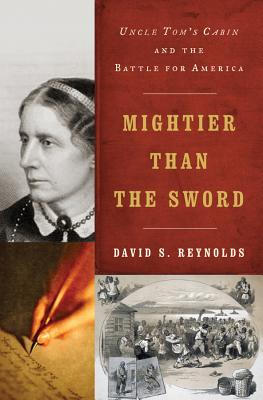 Mightier than the Sword

Uncle Tom's Cabin and the Battle for America

Uncle Tom's Cabin is likely the most influential novel ever written by an American. In a fitting tribute to the two hundredth anniversary of Harriet Beecher Stowe's birth, Bancroft Prize-winning historian David S. Reynolds reveals her book's impact not only on the abolitionist movement and the American Civil War but also on worldwide events, including the end of serfdom in Russia, down to its influence in the twentieth century. He explores how both Stowe's background as the daughter in a famously intellectual family of preachers and her religious visions were fundamental to the novel. And he demonstrates why the book was beloved by millions—and won over even some southerners—while fueling lasting conflicts over the meaning of America. Although vilified over the years as often as praised, it has remained a cultural landmark, proliferating in the form of plays, songs, films, and merchandise—a rich legacy that has both fed and contested American racial stereotypes.


Praise For Mightier than the Sword: Uncle Tom's Cabin and the Battle for America…

A subtle and splendid history of the novel’s effect on American culture.
— Wall Street Journal

Starred Review: A provocative overview of the life and afterlife of one of American literature’s most important texts….A sharp work of cross-disciplinary criticism that gives new power to a diminished novel. Reynolds successfully repositions the novel by Harriet Beecher Stowe as a major political work, crucial not just to the abolitionist movement, but as kindling for the Civil War and an important inspiration to the cultural discussions of race relations through most of the 20th century.
— Kirkus Reviews

Bravura work….Reynolds has given us another cultural history of assured mastery, a history that combines deep erudition, lightly worn, with a lively and readable style.
— Dallas Morning News

Consistently enlightening…Mightier Than the Sword deftly explores the social-intellectual context and personal experience out of which Stowe’s novel evolved into a grand entertainment and a titanic engine of change.

A wonderful history of what may justly be considered America’s national epic.
— Joan Hedrick, author of the Pulitzer Prize-winning Harriet Beecher Stowe: A Life

Deeply researched and compulsively readable…Both the definitive account of the strange but true career of Uncle Tom’s Cabin and a sweeping two-hundred year history of race in America.

— Debby Applegate, author of the Pulitzer Prize-winning The Most Famous Man in America: The Biography of Henry Ward Beecher

You can always count on David Reynolds to surprise and delight, and in his latest work, he does not disappoint. This time, he sets his sights on the far-ranging and fascinating impact of Harriet Beecher Stowe's mammoth bestseller, Uncle Tom's Cabin. In Reynolds’s gifted hands, Mightier Than The Sword is nothing less than an intellectual feast. Bravo for yet another superb book.

— Jay Winik, author of April 1865 and The Great Upheaval

David S. Reynolds is Distinguished Professor of English and American Studies at the Graduate Center of the City University of New York. His books include Walt Whitman’s America: A Cultural Biography; John Brown, Abolitionist; Beneath the American Renaissance: The Subversive Imagination in the Age of Emerson and Melville; Mightier Than the Sword: “Uncle Tom’s Cabin” and the Battle for America; Waking Giant: America in the Age of Jackson; Walt Whitman; George Lippard; and Faith in Fiction: The Emergence of Religious Literature in America. Reynolds is the editor or coeditor of seven books, including Whitman’s Leaves of Grass: The 150th Anniversary Edition, A Historical Guide to Walt Whitman, Harriet Beecher Stowe’s Uncle Tom’s Cabin: The Splendid Edition, and George Lippard’s The Quaker City; or, The Monks of Monk Hall. He is the winner of the Bancroft Prize, the Christian Gauss Award, the Ambassador Book Award, the Gustavus Myers Outstanding Book Prize and has been a finalist for the National Book Critics Circle Award. He is a regular contributor to the New York Times Book Review.
Loading...
or
Not Currently Available for Direct Purchase