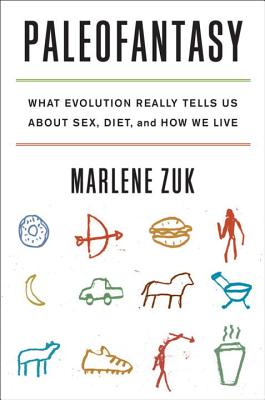 What Evolution Really Tells Us about Sex, Diet, and How We Live

An exposé of pseudoscientific myths about our evolutionary past and how we should live today.

We evolved to eat berries rather than bagels, to live in mud huts rather than condos, to sprint barefoot rather than play football—or did we? Are our bodies and brains truly at odds with modern life? Although it may seem as though we have barely had time to shed our hunter-gatherer legacy, biologist Marlene Zuk reveals that the story is not so simple. Popular theories about how our ancestors lived—and why we should emulate them—are often based on speculation, not scientific evidence.


Armed with a razor-sharp wit and brilliant, eye-opening research, Zuk takes us to the cutting edge of biology to show that evolution can work much faster than was previously realized, meaning that we are not biologically the same as our caveman ancestors.

Contrary to what the glossy magazines would have us believe, we do not enjoy potato chips because they crunch just like the insects our forebears snacked on. And women don’t go into shoe-shopping frenzies because their prehistoric foremothers gathered resources for their clans.

As Zuk compellingly argues, such beliefs incorrectly assume that we’re stuck—finished evolving—and have been for tens of thousands of years. She draws on fascinating evidence that examines everything from adults’ ability to drink milk to the texture of our ear wax to show that we’ve actually never stopped evolving. Our nostalgic visions of an ideal evolutionary past in which we ate, lived, and reproduced as we were “meant to” fail to recognize that we were never perfectly suited to our environment. Evolution is about change, and every organism is full of trade-offs.

From debunking the caveman diet to unraveling gender stereotypes, Zuk delivers an engrossing analysis of widespread paleofantasies and the scientific evidence that undermines them, all the while broadening our understanding of our origins and what they can really tell us about our present and our future.

Praise For Paleofantasy: What Evolution Really Tells Us about Sex, Diet, and How We Live…

We tend to idealize our ancestors, as if they had the perfect life and perfect diet. In highly readable style, Marlene Zuk downplays our paleo-heritage. Not only did we change culturally, we are also genetically a different animal.
— Frans de Waal, author of The Bonobo and the Atheist

Marlene Zuk’s quest to understand prehistory is an elegant guide for the perplexed. Paleofantasy cuts through a confusing tangle of facts and claims to give us a trustworthy road map to the glorious problems of who we are and where we come from.

— Richard Wrangham, author of Catching Fire: How Cooking Made Us Human

In thoroughly engaging and witty prose, Zuk (Sex on Six Legs), a biologist from the University of Minnesota, dismantles the pseudoscience behind nostalgic yearnings for our caveman days.

In this illuminating overview of state-of-the art evolutionary science, [Zuk]
debunks this utopian ideal and demonstrates that not only have humans continued to evolve since our foraging days, but some of those adaptations have been remarkably swift.
— Carl Hays - Booklist

Ms. Zuk’s nutritionally rich scientific fodder will certainly bring intellectual benefits far greater than those provided by the pseudoscientific confections with which we are so often tempted.
— Cordelia Fine - Wall Street Journal

Zuk doesn’t deny that an understanding of evolution can provide important insights into human behavior and health. But as this informative book demonstrates, the work of using evolutionary logic to explain human traits is more like multi-variable calculus than simple arithmetic.
— The Daily Beast

In her witty and well-researched prose, Zuk debunks these pseudoscience-based conceptions and proves that humanity did not have “a time” like the kind depicted by these fantasies; evolution has always been and will continue to be a key player in our species’ future.
— Liz Belliovskaya - Brain World Magazine

Paleofantasy is not another self-help book offering answers on how to eat, exercise, or love better in our evolving world. Instead, Zuk emphasizes that we can approach these aspects of our lives differently based on our genetic makeup.

Zuk ably presents a skeptical and light-hearted view of a long list of palaeofantasies and supposed solutions.
— John Hawks - Nature

With its healthy analysis of lifestyles and changing, evolving habits, Paleofantasy is a top recommendation not just for science holdings, but collections strong in culinary history and evolution.

Paleofantasy is a fascinating and accessible read that I had trouble putting down.

Marlene Zuk is professor of ecology, evolution, and behavior at the University of Minnesota and studies sexual behavior and communication. The author of Paleofantasy and Sex on Six Legs, among other works, she lives in St. Paul.
Loading...
or
Not Currently Available for Direct Purchase