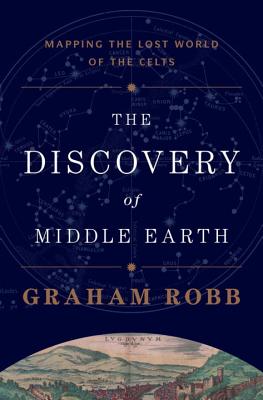 A treasure hunt that uncovers the secrets of one of the world’s great civilizations, revealing dramatic proof of the extreme sophistication of the Celts, and their creation of the earliest accurate map of the world.

Fifty generations ago the cultural empire of the Celts stretched from the Black Sea to Ireland and the Highlands of Scotland. In six hundred years, the Celts had produced some of the finest artistic and scientific masterpieces of the ancient world. In 58 BC, Julius Caesar marched over the Alps, bringing slavery and genocide to western Europe. Within eight years the Celts of what is now France were utterly annihilated, and in another hundred years the Romans had overrun Britain. It is astonishing how little remains of this great civilization.


While planning a bicycling trip along the Heraklean Way, the ancient route from Portugal to the Alps, Graham Robb discovered a door to that forgotten world—a beautiful and precise pattern of towns and holy places based on astronomical and geometrical measurements: this was the three-dimensional “Middle Earth” of the Celts. As coordinates and coincidences revealed themselves across the continent, a map of the Celtic world emerged as a miraculously preserved archival document.

Robb—“one of the more unusual and appealing historians currently striding the planet” (New York Times)—here reveals the ancient secrets of the Celts, demonstrates the lasting influence of Druid science, and recharts the exploration of the world and the spread of Christianity. A pioneering history grounded in a real-life historical treasure hunt, The Discovery of Middle Earth offers nothing less than an entirely new understanding of the birth of modern Europe.

Presenting one of the most astonishing, significant discoveries in recent memory, Robb, winner of the Duff Cooper Prize and Ondaatje Award for The Discovery of France, upends nearly everything we believe about the history—or, as he calls it, 'protohistory'—of early Europe and its barbarous Celtic tribes and semimythical Druids…. Like the vast and intricate geographical latticework that Robb has uncovered, the book unfurls its secrets in an eerie, magnificent way—a remarkable, mesmerizing, and bottomless work.

— Publishers Weekly, Starred Review and Pick of the Week

Upends nearly everything we believe about the history… of early Europe.
— Gabe Habash - Publishers Weekly

Combines travelogue and historical detective story…. The work of a man to whom the past is vividly present.
— Ian Morris - New York Times Book Review

Best-selling author Graham Robb was born in Manchester in 1958 and is a former Fellow of Exeter College, Oxford. He is an acclaimed historian and biographer, a Fellow of the Royal Society of Literature and a Chevalier dans l’Ordre des Arts et des Lettres. He has won the Whitbread Biography Prize and the Heinemann Award for Victor Hugo, as well as the Ondaatje Prize and Duff Cooper Prize for The Discovery of France. His book Parisians was a Sunday Times top ten bestseller. He lives on the Anglo-Scottish border.
Loading...
or
Not Currently Available for Direct Purchase