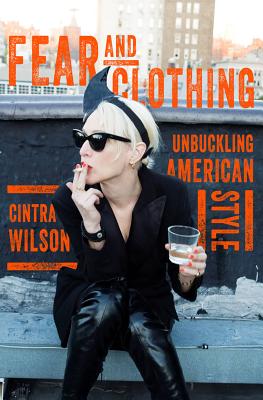 As the former New York Times Critical Shopper, and voted one of Fashionista's 50 Most Influential People in New York Fashion, Cintra Wilson knows something about clothes. And in Fear and Clothing, she imparts her no-holds-barred, totally outrageous, astute, and hilarious wisdom to the reader.

Wilson reports the findings of her "fashion road trip" across the United States, a journey that took three years and ranges across the various economic "belt regions" of America: the Cotton, Rust, Bible, Sun, Frost, Corn, and Gun Belts. Acting as a kind of fashion anthropologist, she documents and decodes the sartorial sensibilities of Americans across the country. Our fashion choices, she argues, contain a riot of visual cues that tell everyone instantly who we are, where we came from, where we feel we belong, what we want, where we are going, and how we expect to be treated when we get there. With this philosophy in hand, she tackles and unpacks the meaning behind the uniforms of Washington DC politicians and their wives, the costumes of Kentucky Derby spectators, the attractive draw of the cowboy hat in Wyoming, and what she terms the "stealth wealth" of distressed clothing in Brooklyn.

In this smart and rollicking book, Wilson illustrates how every closet is a declaration of the owner’s politics, sexuality, class, education, hopes, and dreams. With her signature wit and utterly irreverent humor, Wilson proves that, by donning our daily costume, we create our future selves, for good or ill. Indeed: your fate hangs in your closet. Dress wisely.

On this hilarious and insightful road trip across the country's fashion landscape, Cintra Wilson undresses America with eagle-eyed flair, showing who we are and how each of us could be much more awesome.
— Trevor Paglen

While I may know as much about fashion as the average farm animal, I am in awe of Cintra Wilson's savage, untamed, and deeply learned writing on the subject. Clotheshorses are advised not to attempt reading her book while consuming beverages, since the resulting explosions of laughter may ruin their outfits.
— Luc Sante

All you need to know about Cintra Wilson's new book is CINTRA WILSON WROTE A NEW BOOK. And you get to read it. I envy the gorgeous, razor-blade garden you're about to picnic in.
— Patton Oswalt

Cintra Wilson is a playwright, novelist, and a past columnist for the San Francisco Examiner, Salon, and the New York Times. She lives in New York City.
Loading...
or
Not Currently Available for Direct Purchase