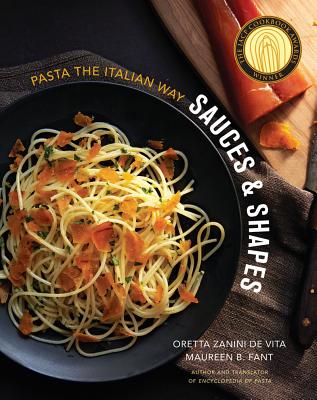 The indispensable cookbook for genuine Italian sauces and the traditional pasta shapes that go with them.

Pasta is so universally popular in the United States that it can justifiably be called an American food. This book makes the case for keeping it Italian with recipes for sauces and soups as cooked in Italian homes today. There are authentic versions of such favorites as carbonara, bolognese, marinara, and Alfredo, as well as plenty of unusual but no less traditional sauces, based on roasts, ribs, rabbit, clams, eggplant, arugula, and mushrooms, to name but a few.

Anyone who cooks or eats pasta needs this book. The straightforward recipes are easy enough for the inexperienced, but even professional chefs will grasp the elegance of their simplicity.


The authors are reluctant to compromise because they know how good well-made pasta can be. But they keep their sense of humor and are sympathetic to all well-intentioned readers.

Spend a little time with Sauces and Shapes and instead of asking why anyone might need yet another pasta cookbook, you might find yourself wondering why you would keep all those others.

Revelation lies between these covers…This book is as much a fascinating lesson in Italian character as it is generous with dishes rarely tasted beyond their home kitchens.
— Lynne Rossetto Kasper, host of American Public Media’s The Splendid Table®

Sauces & Shapes could well be the book that retires all other pasta books…The table of contents alone reads like the most tantalizing trattoria menu from which you just can’t decide which dish to order.

Zanini De Vita and Fant’s Sauces & Shapes accomplishes the impressive feat of presenting a thoroughly Italian perspective on pasta in a package that all American cooks can use and understand.

If you like Italian cooking, Sauces & Shapes will become a timeless, cherished companion.

— Amanda Hesser, cofounder of Food52 and the author of The Essential New York Times Cookbook

This book is meant to help those outside of Italy cook like Italians.
— Publishers Weekly (starred review)

Oretta Zanini De Vita was born in Bologna, where she learned the art of pasta making as a child in a local convent school. A respected Italian culinary historian, she has written more than forty books on Italian food and its traditions, including the James Beard Award–winning Encyclopedia of Pasta (2010) and Popes, Peasants, and Shepherds: Recipes and Lore from Rome and Lazio (2013), both translated by Maureen B. Fant. She lives in Rome.

Maureen B. Fant, a native of New York, is a writer and translator who came to live in Rome in 1979 believing that her future lay in classical archaeology. She now writes mostly about Italian food. She is the coauthor of Women’s Life in Greece and Rome and Dictionary of Italian Cuisine, among others. Her writing has appeared in the New York Times, Gourmet, and other periodicals, and she lectures on the food of Rome and ancient Rome.
Loading...
or
Not Currently Available for Direct Purchase