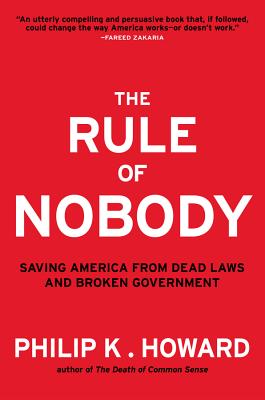 The Rule of Nobody (Hardcover)

The secret to good government is a question no one in Washington is asking: “What’s the right thing to do?”

What’s wrong in Washington is deeper than you think.

Rules have replaced leadership in America. Bureaucracy, regulation, and outmoded law tie our hands and confine policy choices. Nobody asks, “What’s the right thing to do here?” Instead, they wonder, “What does the rule book say?”

There’s a fatal flaw in America’s governing system—trying to decree correctness through rigid laws will never work. Public paralysis is the inevitable result of the steady accretion of detailed rules. America is now run by dead people—by political leaders from the past who enacted mandatory programs that churn ahead regardless of waste, irrelevance, or new priorities.

America needs to radically simplify its operating system and give people—officials and citizens alike—the freedom to be practical. Rules can’t accomplish our goals. Only humans can get things done.

In The Rule of Nobody Philip K. Howard argues for a return to the framers’ vision of public law—setting goals and boundaries, not dictating daily choices. This incendiary book explains how America went wrong and offers a guide for how to liberate human ingenuity to meet the challenges of this century.

Philip K. Howard is the founder of Common Good, a nonprofit that advocates for simplifying government. His book, The Rule of Nobody, was a finalist for the Manhattan Institute’s Hayek Book Prize. He lives in New York.

Praise For The Rule of Nobody: Saving America from Dead Laws and Broken Government…

Philip Howard has been on a lonely crusade for common sense, good government, and other quixotic ideas. He’s done it again with The Rule of Nobody, an utterly compelling and persuasive book that, if followed, could change the way America works—or doesn’t work.

It’s so damn hard to fix things when people can’t—or won’t—make new choices. This powerful book shows how Washington is sinking in legal quicksand, literally beyond the power of those supposedly ‘in charge.’ Perhaps the only solution, as Howard argues, is to prune out these obsolete laws and chop away on the bureaucracy so that citizens of common sense can roll up their sleeves and get to work again as America has always done. Today, leadership is practically illegal.
— Alan K. Simpson, U.S. senator, Wyo. (retired)

Philip K Howard has always struck me as an eminently reasonable, articulate advocate for common sense solutions. No wonder no one listens to him.
— Jon Stewart, The Daily Show

Philip Howard offers a startlingly fresh slant on what is holding America back. No one is free to make choices, including, especially, government officials. Regulatory law has become a nearly impenetrable web of detailed prohibitions and specifications. Everyone is hamstrung. Dense regulation discourages individuals, communities, and companies from taking new initiatives. It also prevents government officials from making the case-by-case judgment needed for effective regulatory oversight. This is an important reason why it is so expensive to start a business, why healthcare costs have gone through the roof, and why innovation has slowed to a crawl.
— Professor Edmund S. Phelps, 2006 Nobel Prize in Economics and director, Center on Capitalism and Society

You’ll laugh and wince and cry at the ridiculous situation America has gotten itself into. Howard shows us how we manufactured the rope we are now hanging ourselves with. Then he shows us how to untie the noose and put America back on the path to trust, competence, and greatness.
— Jonathan Haidt, author of The Righteous Mind

This book is so deep, appealing, and rousing that it has the potential to actually move politics out of its current stasis.
— Christopher DeMuth, Distinguished Fellow, The Hudson Institute

Amid the liberal-conservative ideological clash that paralyzes our government, it’s always refreshing to encounter the views of Philip K. Howard, whose ideology is common sense spiked with a sense of urgency… [This] book drives home some large truths.
— Stuart Taylor Jr.

Howard’s proposed fix is witty, and intriguing: a follow-up to the Bill of Rights called the Bill of Responsibilities. These would be five new Constitutional amendments aimed at making government work better.
— Kyle Smith

Philip K. Howard’s important new book… helps to explain why government at all levels not only is on autopilot but on a flight path that can only end in disaster… The Rule of Nobody ‘envisions a shift in values—away from automatic government and toward a structure that allows humans to make choices needed to adapt to local need and global challenges.’ Well, here’s hoping.

A convincing, provocative argument… Howard’s clear, levelheaded descriptions of how things are done elsewhere…proves his point: We really need to figure out a better way to operate, lest the country grind to a halt.
— Jesse Singal

Rather than asking what’s right to do, Howard contends, government asks what the rulebook says to do. As a result, waste occurs, debt rises, schools fail, health-care costs soar, the economy falters—and even problems that seem simple and easy to solve become bureaucratic nightmares.
— Alan Wallace

Howard has written a splendid book, as entertaining as it is alarming… I cannot imagine how anyone could read it without responding enthusiastically to his call to arms.
— F.H. Buckley

Howard’s red tape case histories—Medicare and nursing home regulations, for example—boggle the mind… [He] is a caring critic, and his call for citizen groups to ally in the fight for responsible government should be heeded.
— Ronald Goldfarb