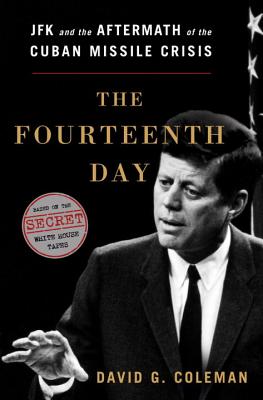 JFK and the Aftermath of the Cuban Missile Crisis: The Secret White House Tapes

A fly-on-the-wall narrative of the Oval Office in the wake of the Cuban Missile Crisis, using JFK’s secret White House tapes.

On October 28, 1962, Soviet Premier Nikita Khrushchev agreed to remove nuclear missiles from Cuba. Popular history has marked that day as the end of the Cuban Missile Crisis, a seminal moment in American history. As President Kennedy’s secretly recorded White House tapes now reveal, the reality was not so simple. Nuclear missiles were still in Cuba, as were nuclear bombers, short-range missiles, and thousands of Soviet troops. From October 29, Kennedy had to walk a very fine line—push hard enough to get as much nuclear weaponry out of Cuba as possible, yet avoid forcing the volatile Khrushchev into a combative stance. On the domestic front, an election loomed and the press was bristling at White House “news management.” Using new material from the tapes, historian David G. Coleman puts readers in the Oval Office during one of the most highly charged, and in the end most highly regarded, moments in American history.


Praise For The Fourteenth Day: JFK and the Aftermath of the Cuban Missile Crisis: The Secret White House Tapes…

No family has been better at shaping its own mythology than the Kennedys. Using White House tapes and his own prodigious research and keen insight, David Coleman has painted a portrait of the JFK White House after the Cuban Missile Crisis as it really was. The picture is not damning, but it is human and revealing.
— Evan Thomas, author of Robert Kennedy: His Life and Ike’s Bluff: President Eisenhower’s Secret Struggle to Save the World

Amid shelves of books on the Kennedy era, here at last is a genuinely fresh and interesting volume about his presidency. Coleman now leads the documentary team that transcribes and explains the recordings of meetings and phone calls that JFK secretly hoarded. Armed with that evidence and an exceptionally firm grasp of the personalities, institutions, and issues of that time, Coleman skillfully shows us a pivotal year, 1962 to mid-1963, the turning point of the Cold War and of the Kennedy presidency.
— Philip Zelikow, former counselor of the Department of State, co-author of The Kennedy Tapes

A half century later there are still important things about the Cuban missile crisis left to explore. David Coleman is the first to use the Kennedy tapes to show that the challenges posed by the crisis did not end on the fabled thirteenth day. The Fourteenth Day is a brilliant reconstruction of a time of superb presidential leadership. It is essential reading for those who love presidential history or just remain fascinated by JFK.

— Timothy Naftali, former director of the Richard Nixon Presidential Library and Museum, co-author of One Hell of a Gamble

Illuminates a previously untold chapter about the most dangerous confrontation in human history.
— Graham Allison, former assistant secretary of Defense, author of Essence of Decision

Fascinating; Coleman brings this remarkable story to life, and his use of material from the Kennedy tapes is particularly impressive. This is the sort of book anyone interested in the period will enjoy reading.
— Marc Trachtenberg, author of A Constructed Peace

An engrossing and revealing account… Coleman has provided an excellent analysis of both short and long term results of the crisis.
— Booklist

The director of the Miller Center’s Presidential Recordings Program, David G. Coleman is a history professor at the University of Virginia. He lives in Arlington.
Loading...
or
Not Currently Available for Direct Purchase