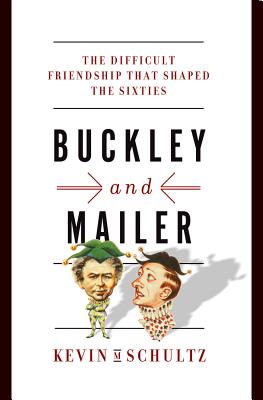 The Difficult Friendship That Shaped the Sixties

A lively chronicle of the 1960s through the surprisingly close and incredibly contentious friendship of its two most colorful characters.

William F. Buckley, Jr., and Norman Mailer were the two towering intellectual figures of the 1960s, and they lived remarkably parallel lives. Both became best-selling authors in their twenties (with God and Man at Yale and The Naked and the Dead); both started hugely influential papers (National Review and the Village Voice); both ran for mayor of New York City; both were noted for their exceptional wit and venom; and both became the figurehead of their respective social movements (Buckley on the right, Mailer on the left). Indeed, Buckley and Mailer argued vociferously and publicly about every major issue of their time: civil rights, feminism, the counterculture, Vietnam, the Cold War. But behind the scenes, the two were close friends and trusted confidantes. In Buckley and Mailer, historian Kevin M. Schultz delves into their personal archives to tell the rich story of their friendship, their arguments, and the tumultuous decade they did so much to shape.

Here is the entertaining and deeply American story of what Mailer himself called a "difficult friendship": from their debate before the Floyd Patterson–Sonny Liston heavyweight fight in 1962 to their failed mayoral campaigns, to their confrontation at Truman Capote’s Black-and-White Ball, to their starring roles in the central events of the ’60s, including the giant antiwar rally in Berkeley, the March on the Pentagon, and the national political conventions in Miami and Chicago. Through it all, Schultz charts their friendship, whether sailing together off the coast of Connecticut, celebrating rave reviews and grousing about lousy ones, and defending each other's decisions privately even as they attack each other’s positions publicly.

Brimming with Buckley and Mailer's own thoughts from their personal diaries and letters, Buckley and Mailer also features cameos by other leading figures of the time, including James Baldwin, Joan Didion, Barry Goldwater, Robert F. Kennedy, Richard Nixon, Gloria Steinem, and Gore Vidal. Schultz delivers a fresh chronicle of the '60s and its long aftermath as well as an enormously engaging work of narrative history that explores these extraordinary figures' contrasting visions of what America was and what it could be.

Kevin M. Schultz holds a PhD in history from Berkeley and teaches twentieth-century American history at the University of Illinois at Chicago. He lives in Chicago.

Praise For Buckley and Mailer: The Difficult Friendship That Shaped the Sixties…

Buckley and Mailer brings alive two talented, tireless characters…. Schultz weave[s] their contrasting public lives together in a way that helps to make sense of an era.

Judging by this ardently researched book, [Buckley and Mailer] seem to have saved every letter they wrote or received, and their lively epistolary relationship forms the core of this perceptive dual portrait.

Buckley and Mailer is a largely respectful portrait, but Schultz doesn’t sugarcoat his subjects’ failings…. Flawed these men were for sure. But…it’s good to remember pundits who thought big, fought big, had something to say and said it with hellacious verve.

Schultz brings a good-natured, entertaining and, rare in academe, highly readable style to his treatment of two 20th century America patriots whose lives enriched us all.
— John R. Coyne Jr.

[A] provocative and thorough…social and political history of the sixties, among the very best we have had.
— Mark Levine

One might think that Bill Buckley and Norman Mailer were not at all alike, but Kevin M. Schultz, in his very entertaining book, reminds us to think again. In fact, despite their complicated political differences, these two American originals liked each other, tried to understand each other, and discovered that that they had much in common: a passion for engagement, for literate expression, and perhaps above all the pleasure they took in playing their outsize selves.
— Jeffrey Frank, best-selling author of Ike and Dick

Riveting. In this superbly written account of two of the most fascinating and important 20th-century American intellectuals, Kevin M. Schultz not only brings the spirits of William Buckley and Norman Mailer back to life, he endows us with a subtle yet profound analytical framework for understanding the massive social changes set off during the Sixties. Anyone who wants to understand contemporary American political culture needs to read this book.
— Andrew Hartman, author of A War for the Soul of America