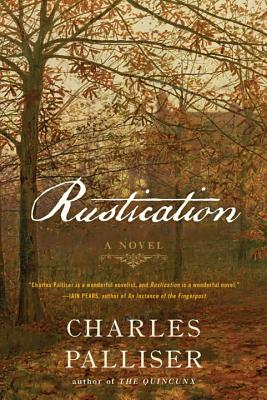 One of the Best Books of the Year by Publishers Weekly

“Endlessly fascinating…one of the strongest novels of the year. ” - School Library Journal

“Readers will have as much grisly fun just sorting out the facts as they will solving the mysteries.” -The Daily Beast

A vertiginous gothic masterpiece from the best-selling author of The Quincunx.

Charles Palliser’s work has been hailed as “so compulsively absorbing that reality disappears” (New York Times). Since his extraordinary debut, The Quincunx, his works have sold over one million copies worldwide. With his new novel, Rustication, he returns to the town of Thurchester, which he evoked so hauntingly in The Unburied.


It is winter 1863, and Richard Shenstone, aged seventeen, has been sent down—“rusticated”—from Cambridge under a cloud of suspicion. Addicted to opium and tormented by sexual desire, he finds temporary refuge in a dilapidated old mansion on the southern English coast inhabited by his newly impoverished mother and his sister, Effie. Soon, graphic and threatening letters begin to circulate among his neighbors, and Richard finds himself the leading suspect in a series of crimes and misdemeanors ranging from vivisection to murder.


Praise For Rustication: A Novel…

Rustication is an ingenious take on the traditional Victorian Gothic novel, daring us to unravel the dark and twisting tale of a murder that hasn’t happened yet. The gripping voice and masterful plotting swirl together in a relentless undertow of gothic intrigue and dread that’s impossible to resist. Not that you’ll want to. This is a brilliant read.

— Kieran Shields, author of The Truth of All Things

— Iain Pears, author of An Instance of the Fingerpost

Will appeal to fans of John Harwood and Michael Cox. Palliser vividly captures the claustrophobic feeling of a small Victorian community being overwhelmed by anxiety and mistrust, and fans of twisty plots will enjoy guessing at the town’s many secrets as they sift through the rumors and gossip offered up by a well-drawn cast of darkly quirky characters.
— Library Journal