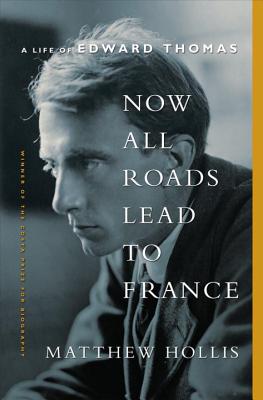 Now All Roads Lead to France

A Life of Edward Thomas

Winner of the Costa Biography Award, a fascinating exploration of one of the twentieth century’s most influential poets.

Edward Thomas was perhaps the most beguiling and influential of the war poets. This haunting account of his final five years follows him from his beloved English countryside to the battlefield in France where he lost his life.


When he met the American poet Robert Frost in 1913, Thomas was tormented by feelings of failure in his work and in his marriage. With Frost’s encouragement he began writing poem after poem as he finally found the expression for which he had spent his life searching. But the First World War put an ocean between them: Frost returned to New England while Thomas enlisted and went to fight in France. It is these roads taken—and not taken—that are at the heart of this unforgettable book, which culminates in Thomas’s tragic death on Easter Monday, 1917.

Now All Roads Lead to France encompasses an astonishingly creative moment in English literature, when London was a battleground for new, ambitious writing. A generation that included W. B. Yeats, Ezra Pound, Robert Frost, and Rupert Brooke was “making it new”—vehemently and pugnaciously—and this dazzling biography places Thomas firmly in their midst.

Praise For Now All Roads Lead to France: A Life of Edward Thomas…

[An] excellent account…beautifully structured by place, year and season.
— Guardian

A perceptive biography that traces an author’s trajectory from disillusioned prose scribe to acclaimed poet.... Poet Hollis (Ground Water, 2004), who edited a volume of Thomas’ selected poetry, expertly recreates the upheaval of English society as it made the transition from genteel post-Victorianism to brash modernism. Thomas stood poised on the dividing line between W.B. Yeats and T.S. Eliot and justly remains a towering figure in English poetry. This diligently researched and masterfully written exposition will appeal to Anglophiles and fans of literary biography.

I read this book entranced, inspired, anxious, and grateful, and I finished it in tears. It is important and it is wonderful.
— Carol Ann Duffy, British poet laureate

Matthew Hollis is the author of Ground Water, shortlisted for the Whitbread Prize for Poetry, the Guardian First Book Award, and the Forward Prize for Best First Collection. Now All Roads Lead to France is his first prose book. It was awarded the H. W. Fisher Best First Biography Prize and the 2011 Costa Biography Prize.
Loading...
or
Not Currently Available for Direct Purchase