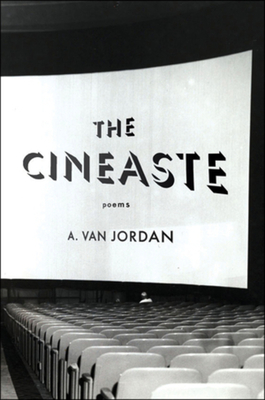 A remarkable montage of poems that explore film, poetry, and the elusiveness of reverie.

A. Van Jordan, an acclaimed American poet and the author of three previous volumes, “demonstrates poetry’s power to be at once intimate and wide-ranging” (Robert Pinsky, Washington Post Book World). In this penetrating new work he takes us with him to the movies, where history reverberates and characters are larger than life. The Cineaste is an entrancing montage of poems, wherein film serves as the setting for contemplative trances, memoir, and pure fantasy. At its center is a sonnet sequence that imagines the struggle of pioneer filmmaker Oscar Micheaux against D. W. Griffith’s The Birth of a Nation, which Micheaux saw not only as racist but also as the start of a powerful new art form. “Sharpen the focus in your lens, and you / Sharpen your view of the world; you can see / How people inhabit space in their lives, / How the skin of Negroes and whites both play / With light.” Scenes and characters from films such as Metropolis, Stranger than Paradise, Last Year at Marienbad, The Red Shoes, and The Great Train Robbery also come to luminous life in this vibrant new collection. The Cineaste is an extended riff on Jordan’s life as a moviegoer and a brilliant exploration of film, poetry, race, and the elusiveness of reverie.


from “Last Year at Marienbad”

of memories. Even memories one forgets

linger in the space in which they occurred.

Here within the expanse of vaulted ceilings,

absorb over time; no act will wholly evanesce.


Praise For The Cineaste: Poems…

The Cineaste is the announcement of the birth of an entirely new poetics. A. Van Jordan brings the art of film and the art of poetry together in a virtuoso act of passion. This work goes beyond memorable speech into an articulation of the spirit, the hunger, the enchantment and terror of a nation and a time. In unforgettably resonant pieces this poetry creates a whole. This is one of our most important poets doing perhaps his own most important work of a lifetime.

For several books now, A. Van Jordan has been proving himself master of the dramatic monologue. His skill is especially dazzling in The Cineaste as he turns to cinema, that other realm of persona and projection. With an imagination illuminated by empathy, Jordan inhabits the eye of the camera, the eye of the actor, and the ‘I’ of a viewer tethered to image and history. These terrific poems give shape to lives made of light.

Brilliant… Every piece denotes feeling—and this is what moves us forward.
— Grace Cavalieri - Washington Independent Review of Books

A. Van Jordan is the author of four previous collections of poetry, most recently The Cineaste. He is the recipient of an Anisfield-Wolf Book Award, a Guggenheim Fellowship, and a Lannan Literary Award, among other honors. He lives in Oakland, California.
Loading...
or
Not Currently Available for Direct Purchase