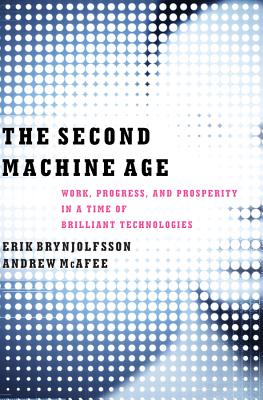 A revolution is under way.


In recent years, Google’s autonomous cars have logged thousands of miles on American highways and IBM’s Watson trounced the best human Jeopardy! players. Digital technologies—with hardware, software, and networks at their core—will in the near future diagnose diseases more accurately than doctors can, apply enormous data sets to transform retailing, and accomplish many tasks once considered uniquely human.

A fundamentally optimistic book, The Second Machine Age will alter how we think about issues of technological, societal, and economic progress.


Praise For The Second Machine Age: Work, Progress, and Prosperity in a Time of Brilliant Technologies…

A terrific book. Brynjolfsson and McAfee combine their knowledge of rapidly evolving digital technologies and relevant economics to give us a colorful and accessible picture of dynamic forces that are shaping our lives, our work, and our economies. For those who want to learn to 'Race with the Machines,' their book is a great place to start.
— Michael Spence, winner of the 2001 Nobel Prize in Economic Sciences

How we build, use, and live with our digital creations will define our success as a civilization in the twenty-first century. Will our new technologies lift us all up or leave more and more of us behind? The Second Machine Age is the essential guide to how and why that success will, or will not, be achieved.

Erik and Andy have lived on the cutting edge, and now, with this book, they are taking us there with them. A brilliant look at the future that technology is bringing to our economic and social lives. Read The Second Machine Age if you want to prepare yourself and your children for the world of work ahead.

The Second Machine Age offers important insights into how digital technologies are transforming our economy, a process that has only just begun. Erik and Andrew’s thesis: As massive technological innovation radically reshapes our world, we need to develop new business models, new technologies, and new policies that amplify our human capabilities, so every person can stay economically viable in an age of increasing automation. I couldn’t agree more.

— Reid Hoffman, cofounder/chairman of LinkedIn and coauthor of the #1 New York Times bestseller The Start-up of You

Although a few others have tried, The Second Machine Age truly helped me see the world of tomorrow through exponential rather than arithmetic lenses. Macro and microscopic frontiers now seem plausible, meaning that learners and teachers alike are in a perpetual mode of catching up with what is possible. It frames a future that is genuinely exciting!

Brynjolfsson and McAfee take us on a whirlwind tour of innovators and innovations around the world. But this isn’t just casual sightseeing. Along the way, they describe how these technological wonders came to be, why they are important, and where they are headed.
— Hal Varian, chief economist at Google

New technologies may bring about our economic salvation or they may threaten our very livelihoods…or they may do both. Brynjolfsson and McAfee have written an important book on the technology-driven opportunities and challenges we all face in the next decade. Anyone who wants to understand how amazing new technologies are transforming our economy should start here.
— Austan Goolsbee, professor of economics at the University of Chicago Booth School of Business and former chairman of the Council of Economic Advisers

After reading this book, your world view will be flipped: you’ll see that collective intelligence will come not only from networked brains but also from massively connected and intelligent machines. In the near future, the best job to have will be the one you would do for free.
— Nicholas Negroponte, cofounder of the MIT Media Lab, founder of One Laptop per Child, and author of Being Digital

The Second Machine Age helps us all better understand the new age we are entering, an age in which by working with the machine we can unleash the full power of human ingenuity. This provocative book is both grounded and visionary, with highly approachable economic analyses that add depth to their vision. A must-read.

— John Seely Brown, coauthor of The Power of Pull and A New Culture of Learning

Information technology is the foundation of the next industrial revolution. Its often unarticulated dark side has been the widening of the economic divide. In this book, McAfee and Brynjolfsson do a masterful job of exploring both the promise of computer technology and its profound societal impact.
— Carl Bass, CEO of Autodesk

Andrew McAfee is the co-director of the MIT Initiative on the Digital Economy and co-author of the best-selling The Second Machine Age and Machine, Platform, Crowd: Harnessing Our Digital Future. He and co-author Erik Brynjolfsson are the only people named to both the Thinkers 50 list of the world’s top management thinkers and the Politico 50 group of people transforming American politics.
Loading...
or
Not Currently Available for Direct Purchase