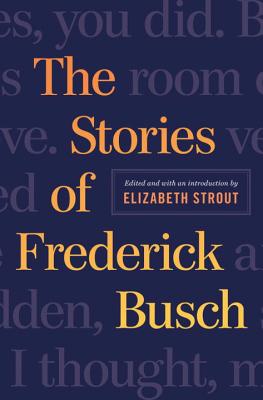 The Stories of Frederick Busch

A selection of short stories from a twentieth-century “American master” (Dan Cryer, Newsday).

A contemporary of Ann Beattie and Tobias Wolff, Frederick Busch was a master craftsman of the form; his subjects were single-event moments in so-called ordinary life. The stories in this volume, selected by Pulitzer Prize winner Elizabeth Strout, are tales of families trying to heal their wounds, save their marriages, and rescue their children. In "Ralph the Duck," a security guard struggles to hang on to his marriage. In "Name the Name," a traveling teacher attends to students outside the school, including his own son, locked in a country jail. In Busch's work, we are reminded that we have no idea what goes on behind closed doors or in the mind of another. In the words of Raymond Carver, "With astonishing felicity of detail, Busch presents us with a world where real things are at stake—and sometimes, as in the real world, everything is risked."


From his first volume, Hardwater Country (1974), to his most recent, Rescue Missions (2006), this volume selects thirty stories from an "American master" (Dan Cryer, Newsday), showcasing a body of work that is sure to shape American fiction for generations to come.


Praise For The Stories of Frederick Busch…

Frederick Busch’s short stories are wonderful things, composed by a fine and far-seeing intelligence that never averts its eyes. His is a first-rate inquirer into the sorrows of ordinary people living ordinary lives and all of it in stripped-down prose—not minimalist but nuclear. Any reader coming to these stories for the first time is in for a revelation: the work of one of the great storytellers of our time.
— Ward Just

These luminous, risky stories by Frederick Busch make art out of the complications of everyday life. They come from a brilliant mind and a large heart, and their many pleasures and insights resonate long after the reading.
— Hilma Wolitzer

Frederick Busch faced every emotion with an open heart and tirelessly energetic language. Never unkind to his characters, he forgave inadequacy if it was genuine, an honest struggle. And of all the writers I can think of, Fred was the most impatient with inauthentic feeling. That richness of spirit, that passion and wit, made his stories indispensable. This book is a great a gift to keep his voice with us and to bring it to those who’ve never had the pleasure of hearing it.
— Rosellen Brown

Showcases his mastery of the short story form…cement[s] Busch’s status as an exemplary craftsman.
— Publishers Weekly

You can count on Busch's prose to be startlingly revelatory, and the brilliance of his sentences endures even out of context… this collection will make more people see Frederick Busch for the master he was, one whose talent for subtle impact was downright maximal.
— Katie Arnold-Ratliff - New York Times Book Review

Deserves to place this ‘writer’s writer’ in the more widely read company of short-story masters like Raymond Carver and Richard Ford, with whom he is often compared.
— Emily Rapp - Boston Globe

Frederick Busch (1941–2006) was the recipient of many honors, including an American Academy of Arts and Letters Fiction Award, a National Jewish Book Award, and the PEN/Malamud Award. The prolific author of sixteen novels and six collections of short stories, Busch is renowned for his writing’s emotional nuance and minimal, plainspoken style. A native of Brooklyn, New York, he lived most of his life in upstate New York, where he worked for forty years as a professor at Colgate University.

Elizabeth Strout is the author of four novels including the Pulitzer Prize–winning Olive Kitteridge and, most recently, The Burgess Boys. She lives in New York.
Loading...
or
Not Currently Available for Direct Purchase