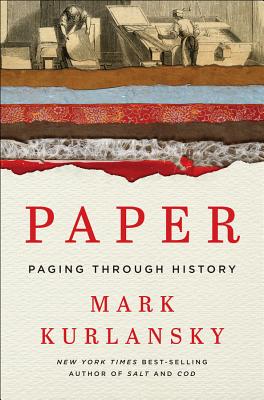 From the New York Times best-selling author of Cod and Salt, a definitive history of paper and the astonishing ways it has shaped today’s world.

Paper is one of the simplest and most essential pieces of human technology. For the past two millennia, the ability to produce it in ever more efficient ways has supported the proliferation of literacy, media, religion, education, commerce, and art; it has formed the foundation of civilizations, promoting revolutions and restoring stability. One has only to look at history’s greatest press run, which produced 6.5 billion copies of Máo zhuxí yulu, Quotations from Chairman Mao Tse-tung (Zedong)—which doesn’t include editions in 37 foreign languages and in braille—to appreciate the range and influence of a single publication, in paper. Or take the fact that one of history’s most revered artists, Leonardo da Vinci, left behind only 15 paintings but 4,000 works on paper. And though the colonies were at the time calling for a boycott of all British goods, the one exception they made speaks to the essentiality of the material; they penned the Declaration of Independence on British paper.

Now, amid discussion of “going paperless”—and as speculation about the effects of a digitally dependent society grows rampant—we’ve come to a world-historic juncture. Thousands of years ago, Socrates and Plato warned that written language would be the end of “true knowledge,” replacing the need to exercise memory and think through complex questions. Similar arguments were made about the switch from handwritten to printed books, and today about the role of computer technology. By tracing paper’s evolution from antiquity to the present, with an emphasis on the contributions made in Asia and the Middle East, Mark Kurlansky challenges common assumptions about technology’s influence, affirming that paper is here to stay. Paper will be the commodity history that guides us forward in the twenty-first century and illuminates our times.

Mark Kurlansky is the New York Times best-selling author of twenty-nine books and a former foreign correspondent for The International Herald Tribune, The Chicago Tribune, The Miami Herald, and The Philadelphia Inquirer. He lives in New York City.

Praise For Paper: Paging Through History…

An historical journey well worth the ride. [Kurlansky] has a deep instinct for telling detail, which he combines with a disarmingly fun narrative style. Kurlansky makes a compelling case that paper has always been a revolutionary force – a foundation for expression of every sort — and that it is certainly not dead yet.
— Elizabeth Taylor

Kurlanksy tells [the history of paper] vividly in this compact and well-illustrated book….He has a sharp eye for curious details….[and] offers a versatile introduction to this long and complicated history.
— Anthony Grafton

A beautiful thing to hold and feel, and it presents a fine argument for the retention of paper as an aesthetically lusty object.
— Simon Garfield

One learns an awful lot from [Paper], all packaged in Kurlansky’s whipsmart prose.

Curious, vital, prolific, and witty…. Kurlansky’s work makes brilliant use of paper as a key to civilization.

Illuminating....Kurlansky is a graceful writer and an industrious researcher.
or support indie stores by buying on
Copyright © 2020 American Booksellers Association