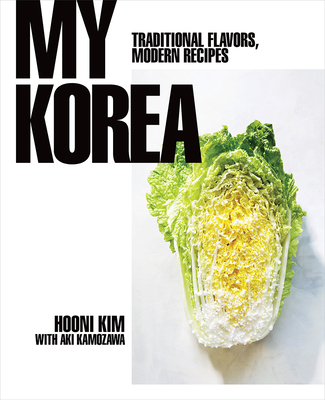 A Michelin-starred chef known for defining Korean food in America brings a powerful culinary legacy into your kitchen.

Simple rice cakes drenched in a spicy sauce. Bulgogi sliders. A scallion pancake (pajeon) the New York Times calls “the essential taste of Korean cuisine.” For years Hooni Kim’s food has earned him raves, including a Michelin Star—the first ever awarded to a Korean restaurant—for Danji. His background in world-class French and Japanese kitchens seamlessly combines with his knowledge of the techniques of traditional Korean cuisine to create uniquely flavorful dishes.

Complete with thoughtful notes on techniques and sourcing and gorgeous photography from across Korea, this cookbook will be an essential resource for home cooks, a celebration of the deliciousness of Korean food by a master chef.

In My Korea, Kim doesn’t pull any punches with flavor in a way that would put off a seasoned cook of Korean cuisine, but he also introduces every ingredient and technique with enough patience and encouragement to entice someone who has never cooked a spicy tofu stew or snacked on kimchi.

Hooni Kim’s debut cookbook, My Korea: Traditional Flavors, Modern Recipes, is part cookbook, part autobiography...Throughout, Kim talks about the importance of jung sung, a Korean word for care, which also translates into cooking with heart and devotion. The chef’s jung sung in making this book is apparent as Kim provides foundational knowledge to make readers aware of Korean culture, beyond just knowing how to cook Korean food.

A passionate, personal story of an immigrant’s sense of identity and belonging through food. Every page is vibrant and inspirational, and you’ll want to eat and cook every recipe.
— Anita Lo, chef and author of Solo

Finally, a true Korean cookbook filled with recipes that are unapologetically traditional and incredibly well researched. Hooni Kim is not just an amazing chef—he is someone who is creating an essential archive of Korean food for generations to come. If you want to know about Korean cuisine, this is the book to own!
— Edward Lee, chef, 610 Magnolia, and author of Buttermilk Graffiti

It is inspiring to see someone so creative, focused, and passionate about sharing the cuisine of their culture. This cookbook focuses on the pillar of Korean cuisine behind each recipe, which to me is the most soulful way to cook.
— Daniel Boulud, chef and restaurateur

[An] enveloping guide to Korean home cooking...Kim’s book is a boon to anyone who savors Korean flavors.
— Bill Addison - Los Angeles Times

Chef Hooni Kim is a true champion of modern Korean cuisine in America. The recipes in My Korea are the perfect mix of tradition and innovation, standing out thanks to his deep personal touch.

Hooni’s love for Korea and the tradition of the foods and culture are something he has spent his life as a chef delving into. My Korea is a peek into his view of what Korean food means to him.

Chef Hooni Kim, the first Michelin-starred chef in Korean cuisine, trained at Daniel and Masa before opening Danji and Hanjan. Born in Seoul, he divides his time between New York City and Korea, where he is the founder of Yori Chunsa, a nonprofit that trains orphans to become cooks.
Loading...
or support indie stores by buying on