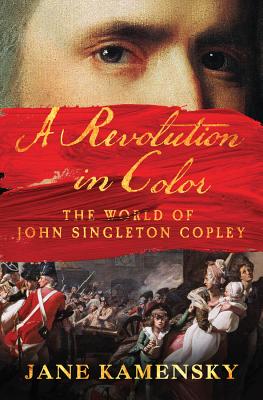 A Revolution in Color (Hardcover)

The World of John Singleton Copley

This bold new history recovers an unknown American Revolution as seen through the eyes of Boston-born painter John Singleton Copley.

Boston in the 1740s: a bustling port at the edge of the British empire. A boy comes of age in a small wooden house along the Long Wharf, which juts into the harbor, as though reaching for London thousands of miles across the ocean. Sometime in his childhood, he learns to draw.

That boy was John Singleton Copley, who became, by the 1760s, colonial America’s premier painter. His brush captured the faces of his neighbors—ordinary men like Paul Revere, John Hancock, and Samuel Adams—who would become the revolutionary heroes of a new United States. Today, in museums across America, Copley’s brilliant portraits evoke patriotic fervor and rebellious optimism.

The artist, however, did not share his subjects’ politics. Copley’s nation was Britain; his capital, London. When rebellion sundered Britain’s empire, both kin and calling determined the painter’s allegiances. He sought the largest canvas for his talents and the safest home for his family. So, by the time the United States declared its independence, Copley and his kin were in London. He painted America’s revolution from a far shore, as Britain’s American War.

An intimate portrait of the artist and his extraordinary times, Jane Kamensky’s A Revolution in Color masterfully reveals the world of the American Revolution, a place in time riven by divided loyalties and tangled sympathies. Much like the world in which he lived, Copley’s life and career were marked by spectacular rises and devastating falls. But though his ambivalence cost him dearly, the painter’s achievements in both Britain and America made him a towering figure of both nations’ artistic legacies.

Jane Kamensky is professor of history at Harvard University and the Pforzheimer Director of the Schlesinger Library at the Radcliffe Institute for Advanced Study. Her many books include A Revolution in Color and The Exchange Artist, a finalist for the George Washington Book Prize.

Praise For A Revolution in Color: The World of John Singleton Copley…

Far from a born partisan, Copley could have gone either way. Kamensky’s great accomplishment is to leave readers pulled by different audiences, demands, and political allegiances right along with him.
— Caitlin Fitz

A memorable journey into the transatlantic world in the age of revolution through a close study of the greatest colonial American artist. Kamensky, a historian with an art historian’s sensibility, provides a brilliant survey of John Singleton Copley’s life, work, and subjects, vivified by a detailed examination of letters, diaries, and official records, many previously untapped, to involve the reader in the emotional and sensory experience of living in those tumultuous times.
— Jules Prown, Yale University

Vivid, intimate, and richly detailed, Jane Kamensky’s biography of John Singleton Copley illuminates the deeply intertwined worlds of America and England at the moment of their violent divorce. The career of the great painter from Boston provides a wonderfully fresh and surprising perspective on the American Revolution, on the scope of artistic ambition, and on the high costs of divided loyalty.
— Stephen Greenblatt, author of The Swerve

Jane Kamensky has not only crafted a stunning biography but also a truly singular account of the American Revolution. A Revolution in Color masterfully unravels any easy distinctions between patriots and loyalists.

— Amanda Foreman, author of The World Made by Women

The greatest American artist of the eighteenth century, John Singleton Copley, preferred life in Britain, escaping from the bitter civil war that we call the American Revolution. In this brilliantly insightful and lucidly written biography, Jane Kamensky reveals the age of revolution in fresh new tones as complex and compelling as the interplay of light and shade in the finest Copley painting.
— Alan Taylor, author of American Revolutions

A pleasure to read from first page to last, Jane Kamensky’s exploration of the life, work and tumultuous times of John Singleton Copley is itself a masterpiece. Like all excellent portraitists, Kamensky probes deeply into the character of her subject, as deft with the small, revealing detail as she is with the sweeping strokes of landscape and setting. Both gripping narrative history and insightful art criticism, A Revolution in Color is a genre-busting tour de force.

Beautifully written and elegant, A Revolution in Color gives us a vibrant and new perspective on the conflict between America and Great Britain, a conflict the ambitious John Singleton Copley embodied. Jane Kamensky enriches our understanding of this vital time in world history.

— Annette Gordon-Reed, author of "Most Blessed of the Patriarchs"

Richly resourced, prismatic, dynamic, factually and psychologically revelatory, and ebulliently spiked with political insights and ironies, Kamensky’s biography provides an intimate view of the American Revolution and its immediate aftermath as seen through the "acute, penetrating" gaze of a masterful artist.
— Donna Seaman

There may never be a better biography of Copley than this sumptuous, exquisitely told story of a man and his time.