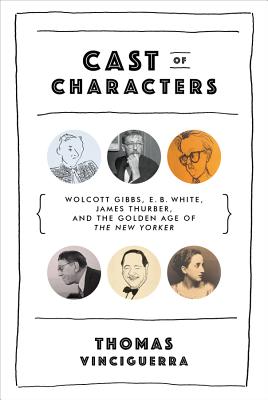 Wolcott Gibbs, E. B. White, James Thurber, and the Golden Age of The New Yorker

The professional and personal lives of the pioneers of an enduring magazine.

From its birth in 1925 to the early days of the Cold War, The New Yorker slowly but surely took hold as the country’s most prestigious, entertaining, and informative general-interest periodical. In Cast of Characters, Thomas Vinciguerra paints a portrait of the magazine’s cadre of charming, wisecracking, driven, troubled, brilliant writers and editors.

He introduces us to Wolcott Gibbs, theater critic, all-around wit, and author of an infamous 1936 parody of Time magazine. We meet the demanding and eccentric founding editor Harold Ross, who would routinely tell his underlings, "I'm firing you because you are not a genius," and who once mailed a pair of his underwear to Walter Winchell, who had accused him of preferring to go bare-bottomed under his slacks. Joining the cast are the mercurial, blind James Thurber, a brilliant cartoonist and wildly inventive fabulist, and the enigmatic E. B. White—an incomparable prose stylist and Ross's favorite son—who married The New Yorker's formidable fiction editor, Katharine Angell. Then there is the dashing St. Clair McKelway, who was married five times and claimed to have no fewer than twelve personalities, but was nonetheless a superb reporter and managing editor alike. Many of these characters became legends in their own right, but Vinciguerra also shows how, as a group, The New Yorker’s inner circle brought forth a profound transformation in how life was perceived, interpreted, written about, and published in America.

Cast of Characters may be the most revealing—and entertaining—book yet about the unique personalities who built what Ross called not a magazine but a "movement."

Thomas Vinciguerra is a founding editor of The Week magazine and a regular contributor to the New York Times. He is the editor of Conversations with Elie Wiesel and Backward Ran Sentences: The Best of Wolcott Gibbs from The New Yorker. He lives on Long Island.

Praise For Cast of Characters: Wolcott Gibbs, E. B. White, James Thurber, and the Golden Age of The New Yorker…

Vinciguerra is an artful stage manager of his material; at times, one has a stirring sense of eavesdropping on intimate, literate, testy conversations. As a writer, he has a knack for understatement, an eye for the odd and telling fact….his writing would not be out of place in a New Yorker issue of, say, 1938. I hasten to add that that is a high compliment.

Fresh and invigorating…it’s to Vinciguerra’s great credit that he manages to avoid both condescension and hagiography in writing about the flawed, brilliant people behind it.
— Kate Tuttle

Captures the eccentricities and idiosyncrasies of its editors and writers…will be embraced be faithful New Yorker readers.


Vinciguerra’s writing has a way of bringing these characters to sparkling life…. New Yorker readers are a dedicated lot and will snap this ‘golden age’ volume up.


Irresistible…a banquet of information about the good writing and bad manners of the eccentric crew who made a myth both of themselves and of the journal they made famous. Vinciguerra writes a sharp, crisp sentence, and tells his story with brio.
— John Lahr, author of Tennessee Williams: Mad Pilgrimage of the Flesh

Reading Thomas Vinciguerra’s Cast of Characters is like being at a tantalizing gossip session about the star writers and supporting players of The New Yorker in its formative years. The book is entertaining, often surprising, and deeply interesting. Vinciguerra is an avid chronicler and a fair one.

— Mary Norris, New York Times best-selling author of Between You and Me

To lovers of The New Yorker, Tom Vinciguerra’s marvelous Cast of Characters is a must-have. It’s as close as you’ll ever get to going behind the scenes with Wolcott Gibbs, James Thurber, E. B. and Katharine White, and their colleagues as they helped Harold Ross create this influential publication. Gibbs’s role in particular is a revelation.

— Thomas Kunkel, author of Man in Profile: Joseph Mitchell of The New Yorker

Too many of the books about the Algonquin Round Table and The New Yorker magazine are little more than laundry lists of well-worn anecdotes. Thomas Vinciguerra gives us substance along with the bon mots and, in so doing, evokes the bright, brilliant, long-ago Manhattan that all newcomers have dreamed of finding.

— Tim Page, author of Dawn Powell: A Biography and winner of the Pulitzer Prize for Criticism

Writing this scrupulous is almost never this completely entertaining. Cast of Characters brings White, Thurber, and Gibbs—and the American culture of letters during an unexampled heyday—to brilliant life.

— Daniel Menaker, author of My Mistake: A Memoir

Compulsively readable, laugh-out-loud funny. With talent, tireless research, and the necessary obsession, Tom Vinciguerra has managed to breathe fresh life into a famous and glittering cast of characters…. The history of The New Yorker is richer for it.