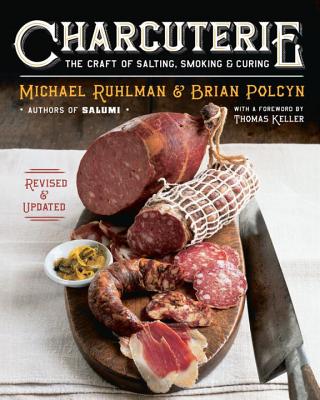 The Craft of Salting, Smoking, and Curing

An essential update of the perennial bestseller.

Charcuterie exploded onto the scene in 2005 and encouraged an army of home cooks and professional chefs to start curing their own foods. This love song to animal fat and salt has blossomed into a bona fide culinary movement, throughout America and beyond, of curing meats and making sausage, pâtés, and confits. Charcuterie: Revised and Updated will remain the ultimate and authoritative guide to that movement, spreading the revival of this ancient culinary craft.

Early in his career, food writer Michael Ruhlman had his first taste of duck confit. The experience “became a fascination that transformed into a quest” to understand the larger world of food preservation, called charcuterie, once a critical factor in human survival. He wondered why its methods and preparations, which used to keep communities alive and allowed for long-distance exploration, had been almost forgotten. Along the way he met Brian Polcyn, who had been surrounded with traditional and modern charcuterie since childhood. “My Polish grandma made kielbasa every Christmas and Easter,” he told Ruhlman. At the time, Polcyn was teaching butchery at Schoolcraft College outside Detroit.

Ruhlman and Polcyn teamed up to share their passion for cured meats with a wider audience. The rest is culinary history. Charcuterie: Revised and Updated is organized into chapters on key practices: salt-cured meats like pancetta, dry-cured meats like salami and chorizo, forcemeats including pâtés and terrines, and smoked meats and fish. Readers will find all the classic recipes: duck confit, sausages, prosciutto, bacon, pâté de campagne, and knackwurst, among others. Ruhlman and Polcyn also expand on traditional mainstays, offering recipes for hot- and cold-smoked salmon; shrimp, lobster, and leek sausage; and grilled vegetable terrine. All these techniques make for a stunning addition to a contemporary menu.

Thoroughly instructive and fully illustrated, this updated edition includes seventy-five detailed line drawings that guide the reader through all the techniques. With new recipes and revised sections to reflect the best equipment available today, Charcuterie: Revised and Updated remains the undisputed authority on charcuterie.

Michael Ruhlman has written and coauthored many bestsellers, among them The Soul of a Chef, The French Laundry Cookbook, Ratio, and other books. He lives in New York City and Providence, Rhode Island, with his wife, Ann Hood.

Brian Polcyn is the former chef/owner of Forest Grill and Five Lakes Grill, among other Detroit-area restaurants, and he is a professor of charcuterie at Schoolcraft College in Michigan.

Praise For Charcuterie: The Craft of Salting, Smoking, and Curing…

This book reminds me what a hopeful time it is for cooking in this country. In fact, this may be the most exciting time ever to be a cook and a chef in America. And Charcuterie is a perfect example of why.

— from the foreword by Thomas Keller, chef /owner of The French Laundry and Per Se Restaurants

Michael Ruhlman and Brian Polcyn are doing God’s work: making the noble art of charcuterie accessible and easily understood. Charcuterie is an important and definitive work that deserves to stand proudly and forever in every serious cook’s kitchen.

Good charcuterie recipes are as closely guarded as family secrets. As a young cook in Moissac, France, I had to spy and even participate in the killing of my neighbor’s pig just to get his pâté recipe. In Charcuterie, Michael Ruhlman and Brian Polcyn demystify all of this and share with us the best techniques to cure, smoke, and preserve meat in the tradition of the best charcutiers out there.

Chock-full of sound practical advice and a wide range of recipes that cross cultures and traditions, Charcuterie provides an open window on the delicious possibilities available to the home cook and professional chef alike.

Charcuterie surpasses my most extravagant hopes for what such a book could be. It will inspire droves of cooks. If it doesn’t tell you everything you need to know about making charcuterie, it certainly establishes a gold standard for how to say it.