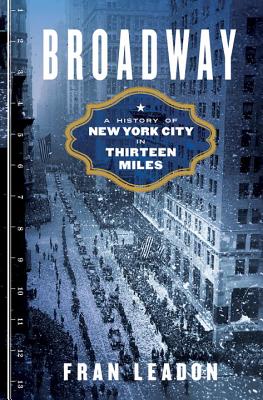 A History of New York City in Thirteen Miles

An eye-opening history of Manhattan told through its most celebrated street.

In the early seventeenth century, in a backwater Dutch colony, there was a wide, muddy cow path that the settlers called the Brede Wegh. As the street grew longer, houses and taverns began to spring up alongside it. What was once New Amsterdam became New York, and farmlands gradually gave way to department stores, theaters, hotels, and, finally, the perpetual traffic of the twentieth century’s Great White Way. From Bowling Green all the way up to Marble Hill, Broadway takes us on a mile-by-mile journey up America’s most vibrant and complex thoroughfare, through the history at the heart of Manhattan.

Today, Broadway almost feels inevitable, but over the past four hundred years there have been thousands who have tried to draw and erase its path. Following their footsteps, we learn why one side of the street was once considered more fashionable than the other; witness the construction of Trinity Church, the Flatiron Building, and the Ansonia Hotel; the burning of P. T. Barnum’s American Museum; and discover that Columbia University was built on the site of an insane asylum. Along the way we meet Alexander Hamilton, Emma Goldman, Edgar Allan Poe, John James Audubon, "Bill the Butcher" Poole, and the assorted real-estate speculators, impresarios, and politicians who helped turn Broadway into New York’s commercial and cultural spine.

Broadway traces the physical and social transformation of an avenue that has been both the "Path of Progress" and a "street of broken dreams," home to both parades and riots, startling wealth and appalling destitution. Glamorous, complex, and sometimes troubling, the evolution of an oft-flooded dead end to a canyon of steel and glass is the story of American progress.

Praise For Broadway: A History of New York City in Thirteen Miles…

Wonderful. This isn’t only a history of Broadway—it’s a history of the entire city told through the story of the most famous street in America. Engagingly written and full of vivid characters. I couldn’t put it down.
— Kenneth T. Jackson, editor-in-chief, The Encyclopedia of New York City

Meticulously researched…Leadon’s tale is a whirl of characters…It is a whirl, too, of events…graced with wry wit.
— Clyde Haberman

A new history of the street that tells the story of modern America.
— David Taylor

A magical mystery tour of the street that invented American popular culture.
— Mike Davis, author of City of Quartz

[An] entertaining look at how the growth and development of New York City’s most famous street paralleled that of Manhattan…A welcome complement to more daunting and encyclopedic volumes on New York’s history.

Impressively detailed…A lively history of one of the most famous streets in America.

[Leadon's] knowledge is expansive…[Broadway] is engagingly written and supplemented by good, easy-to-follow maps at each milestone.

Fran Leadon is an architect and coauthor of the fifth edition of the AIA Guide to New York City. A native of Gainesville, Florida, he teaches at the City College of New York and lives in Brooklyn.
or support indie stores by buying on