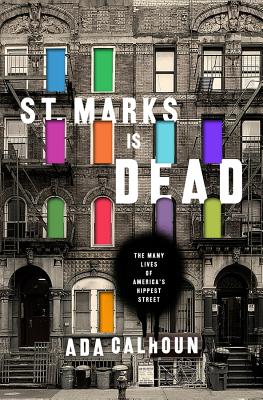 The Many Lives of America's Hippest Street

St. Marks Place in New York City has spawned countless artistic and political movements. Here Frank O’Hara caroused, Emma Goldman plotted, and the Velvet Underground wailed. But every generation of miscreant denizens believes that their era, and no other, marked the street’s apex. This idiosyncratic work of reportage tells the many layered history of the street—from its beginnings as Colonial Dutch Director-General Peter Stuyvesant’s pear orchard to today’s hipster playground—organized around those pivotal moments when critics declared “St. Marks is dead.”

In a narrative enriched by hundreds of interviews and dozens of rare images, St. Marks native Ada Calhoun profiles iconic characters from W. H. Auden to Abbie Hoffman, from Keith Haring to the Beastie Boys, among many others. She argues that St. Marks has variously been an elite address, an immigrants’ haven, a mafia warzone, a hippie paradise, and a backdrop to the film Kids—but it has always been a place that outsiders call home.


Praise For St. Marks Is Dead: The Many Lives of America's Hippest Street…

Fascinating…through exhaustive research and vivid storytelling, Calhoun recounts the happenings and personalities that dotted both the literal and metaphorical landscape of the iconic East Village Street.
— Jay Ruttenberg - Village Voice

What an entertaining and exhilarating read. Deeply researched and thought-provoking, this book is a joyride through the history of New York.
— Jami Attenberg, author of The Middlesteins

— Karen Abbott, author of Sin in the Second City

The New York Dolls, the Ramones, the Velvet Underground, Teenage Jesus and the Jerks, and a million other bands (including mine) spent time on St. Marks Place. Ada Calhoun’s wonderful book tells punk’s story in a totally new and exciting way. Plus, it has more sex-per-page than any cultural history I’ve ever read.
— Kathleen Hanna

As a teenager I skateboarded, wrote music, and drank malt liquor on St. Marks Place. After the early ’80s, I thought the street was dead. But in this terrific book Ada Calhoun proves that every generation had its moment.
— Adam Horovitz

I love this funny, sad, amazing book. St. Marks Place is the most interesting street in the world, because it doesn’t try to be; it’s abnormal and impossible and ugly and sexy and annoying and inspiring. And the story was written by a St. Marks child, which is probably the only way it could’ve been told.
— Colin Quinn

Ada Calhoun’s spellbinding book contains so much riveting history that was heretofore unknown to me, and her portrayal of the characters brings the history alive as vividly as an epic TV drama. For me, St. Marks Place Is Dead rivals Armistead Maupin’s Tales of the City.

Roll up. Roll up for the St. Marks Place tour! Ada Calhoun will take you on a hilarious and poignant ride through the history of one of the world’s most storied streets. At once an archaeologist, detective, and charismatic tour guide, Ada unearths the hidden historical gems that give the street its richness and depth.
— Lili Taylor

A nuanced, captivating, and thoroughly fun ride through St. Marks’s lineage, celebrating the radical and downright weird nature that has drawn people to it for generations.
— Emily Colucci - Los Angeles Review of Books

Ada Calhoun has written for the New York Times, New York magazine, and the New York Post. Her book St. Marks Is Dead was named a New York Times Editors’ Choice and a Boston Globe Best Book of the Year.
Loading...
or
Not Currently Available for Direct Purchase