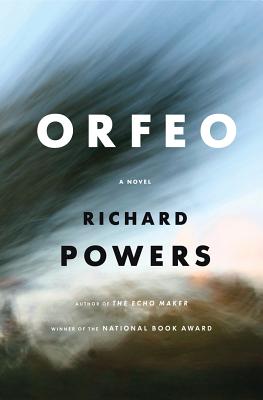 "If Powers were an American writer of the nineteenth century…he'd probably be the Herman Melville of Moby-Dick. His picture is that big," wrote Margaret Atwood (New York Review of Books). Indeed, since his debut in 1985 with Three Farmers on Their Way to a Dance, Richard Powers has been astonishing readers with novels that are sweeping in range, dazzling in technique, and rich in their explorations of music, art, literature, and technology.

In Orfeo, Powers tells the story of a man journeying into his past as he desperately flees the present. Composer Peter Els opens the door one evening to find the police on his doorstep. His home microbiology lab—the latest experiment in his lifelong attempt to find music in surprising patterns—has aroused the suspicions of Homeland Security. Panicked by the raid, Els turns fugitive. As an Internet-fueled hysteria erupts, Els—the "Bioterrorist Bach"—pays a final visit to the people he loves, those who shaped his musical journey. Through the help of his ex-wife, his daughter, and his longtime collaborator, Els hatches a plan to turn this disastrous collision with the security state into a work of art that will reawaken its audience to the sounds all around them. The result is a novel that soars in spirit and language by a writer who “may be America’s most ambitious novelist” (Kevin Berger, San Francisco Chronicle).


Praise For Orfeo: A Novel…

Part of the fun of reading [Powers] is to see how he wriggles out of his own snares. But a greater thrill is to join with him in untangling the most urgent and confounding puzzles of our age.
— Nathaniel Rich - New York Times Book Review

One long express-train ride to the gorgeous. And the scenery is as sublime as ever.
— Laura Miller - Salon

Orfeo is that rare novel truly deserving of the label 'lyrical'…Powers offers a profound story whose delights are many and lasting.

Richard Powers is the author of thirteen novels, including The Overstory and Orfeo, and the recipient of a MacArthur Fellowship, the Pulitzer Prize, and the National Book Award. He lives in the foothills of the Great Smoky Mountains.