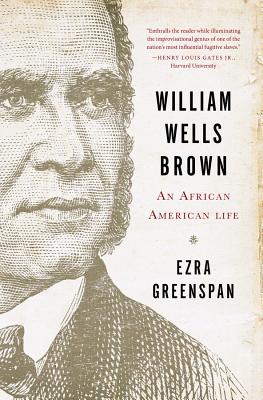 A groundbreaking biography of the most pioneering and accomplished African-American writer of the nineteenth century.


Born into slavery in Kentucky, raised on the Western frontier on the farm adjacent to Daniel Boone’s, “rented” out in adolescence to a succession of steamboat captains on the Mississippi and Missouri rivers, the young man known as “Sandy” reinvented himself as “William Wells” Brown after escaping to freedom. He lifted himself out of illiteracy and soon became an innovative, widely admired, and hugely popular speaker on antislavery circuits (both American and British) and went on to write the earliest African American works in a plethora of genres: travelogue, novel (the now canonized Clotel), printed play, and history. He also practiced medicine, ran for office, and campaigned for black uplift, temperance, and civil rights.


Ezra Greenspan’s masterful work, elegantly written and rigorously researched, sets Brown’s life in the richly rendered context of his times, creating a fascinating portrait of an inventive writer who dared to challenge the racial orthodoxies and explore the racial complexities of nineteenth-century America.

A compelling life of one of the most remarkable men of the nineteenth century—a boon to our understanding of African American and American culture.
— Arnold Rampersad, Stanford University

A scholarly tour de force. Drawing from an astonishing range of primary materials, Greenspan renders Brown’s life in a gripping, elegant narrative that opens up many new vistas on Brown and his world.
— David S. Reynolds, CUNY Graduate Center

Rich and fascinating…Ezra Greenspan has accomplished a remarkable feat of innovative research and has lucidly brought Brown, the self-taught former slave, to life as a person and as a writer who repeatedly reinvented himself in several genres while producing a brilliant critique of America’s dilemma with race.
— David W. Blight, Yale University

In his day, Brown rivaled Frederick Douglass as a prominent black abolitionist and exceeded him as an author of important histories and biographies of African Americans. Ezra Greenspan’s definitive biography rescues Brown from undeserved obscurity.
— James M. McPherson, Princeton University

William Wells Brown not only was the first African American novelist; he was a master at bringing his contemporaries, the heroic black men and women of the Civil War generation, into full view with his pen. Now, at last, biographer Ezra Greenspan has done the same for Brown. The result is an “experimental voyage,” beautifully written and exhaustively researched, that enthralls the reader while illuminating the improvisational genius of one of the nation’s most influential fugitive slaves. In reconstructing the fullness of his story, long obscured by the Jim Crow era that followed, William Wells Brown: An African American Life, ensures that Brown’s rightful place in the constellation of leading black men and women of letters will remain fixed for future generations.”

Greenspan’s detailed study of this life of constant growth should win Brown his proper place in American history.
— Publishers Weekly

Ezra Greenspan is the Edmund J. and Louise W. Kahn Professor of English at Southern Methodist University and the editor of William Wells Brown: A Reader. He lives in Dallas, Texas.
Loading...
or
Not Currently Available for Direct Purchase