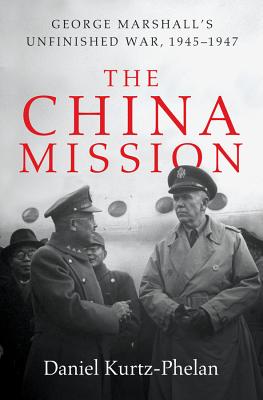 An Economist Best Book of 2018

A spellbinding narrative of the high-stakes mission that changed the course of America, China, and global politics—and a rich portrait of the towering, complex figure who carried it out.

As World War II came to an end, General George Marshall was renowned as the architect of Allied victory. Set to retire, he instead accepted what he thought was a final mission—this time not to win a war, but to stop one. Across the Pacific, conflict between Chinese Nationalists and Communists threatened to suck in the United States and escalate into revolution. His assignment was to broker a peace, build a Chinese democracy, and prevent a Communist takeover, all while staving off World War III.

In his thirteen months in China, Marshall journeyed across battle-scarred landscapes, grappled with Mao Zedong and Zhou Enlai, and plotted and argued with Generalissimo Chiang Kai-shek and his brilliant wife, often over card games or cocktails. The results at first seemed miraculous. But as they started to come apart, Marshall was faced with a wrenching choice. Its consequences would define the rest of his career, as the secretary of state who launched the Marshall Plan and set the standard for American leadership, and the shape of the Cold War and the US-China relationship for decades to come. It would also help spark one of the darkest turns in American civic life, as Marshall and the mission became a first prominent target of McCarthyism, and the question of “who lost China” roiled American politics.

The China Mission traces this neglected turning point and forgotten interlude in a heroic career—a story of not just diplomatic wrangling and guerrilla warfare, but also intricate spycraft and charismatic personalities. Drawing on eyewitness accounts both personal and official, it offers a richly detailed, gripping, close-up, and often surprising view of the central figures of the time—from Marshall, Mao, and Chiang to Eisenhower, Truman, and MacArthur—as they stood face-to-face and struggled to make history, with consequences and lessons that echo today.

Thoroughly researched and compellingly written, [The China Mission] is at once a revealing study of character and leadership, a vivid reconstruction of a critical episode in the history of the Cold War and an insightful meditation on the limits of American power even at its peak.

The story Kurtz-Phelan tells is a gripping one [and] does a splendid job of delineating Marshall’s evolving relationships. ... an enormous contribution to our understanding of Marshall.
— John Pomfret - The Washington Post

[A] compelling portrait of a remarkable soldier and statesman, and an instructive lesson in the limits of American power, even at its zenith.
— Economist

Deeply researched and written with verve, [The China Mission] ought to be read by any U.S. foreign-policy maker practicing diplomacy in Asia. … Mr. Kurtz-Phelan has performed a service in reviving this important episode with such aplomb, rigor and pace.

Now [Marshall’s China mission] has been brilliantly described in the detail it deserves by Daniel Kurtz-Phelan, the executive editor of Foreign Affairs, who seems to have consulted all relevant primary and secondary sources. ... Kurtz-Phelan is particularly good at using his various sources to bring Marshall’s personality to life.

America has always sought to convert rather than understand China, whether to Christianity or capitalism. In this brilliant historical study, Daniel Kurtz-Phelan focuses on the pivotal moment of misunderstanding between these two very different countries. As a bonus, he provides a beautifully written portrait of George Marshall, a statesman of such integrity that he seems as far removed from Washington, D.C., today as would an ancient Roman.
— Fareed Zakaria, CNN host and author of The Post-American World

The China Mission has much to teach us about both the past and future of American leadership—and about what individual leadership means in the face of hard choices. I have rarely read such a vivid account of how diplomacy really works.

The best character study of Marshall I’ve yet seen. He comes alive here as in nothing else that’s been written about him. A major achievement.
— John Lewis Gaddis, author of George F. Kennan and professor of history, Yale University

In gripping, crystalline detail, Kurtz-Phelan has given us a vital new chapter on American statecraft. The lessons from what he calls the ‘unsettled world’ of the early Cold War are urgently relevant today. The China Mission will be read for years to come as a window on the origins of American power—and the limits of its reach.

Was America’s greatest statesman to blame for America’s greatest diplomatic failure? In this wonderfully written book, Daniel Kurtz-Phelan sheds a bright light on a crucial but dimly understood chapter in US foreign policy. His portrait of Marshall is a model of empathetic but clear-eyed biography.
— Evan Thomas, author of Ike’s Bluff and coauthor of The Wise Men

Kurtz-Phelan has written a marvelous narrative about General George Marshall’s valiant effort to bring Chiang Kai-shek and Mao Zedong together at the end of WW II. But apart from the engrossing China saga, what makes this books so absorbing - and sometimes even even touching - is that it draws the reader into the life of a truly great American, reminding us of a different time in America’s odyssey when a sense of modesty, service to mankind, and duty to country were enthroned and esteemed.
— Orville Schell, Arthur Ross Director of the Center on U.S.-China Relations

An outstanding book on a very important subject: how to use American power judiciously and effectively in a rapidly changing world.
— Odd Arne Westad, S. T. Lee Professor of US-Asia Relations, Harvard University

Daniel Kurtz-Phelan is the executive editor of Foreign Affairs. He previously served in the US State Department as a member of the secretary of state’s Policy Planning Staff. His reportage and analysis have appeared in publications including the New York Times and The New Yorker.
Loading...
or support indie stores by buying on