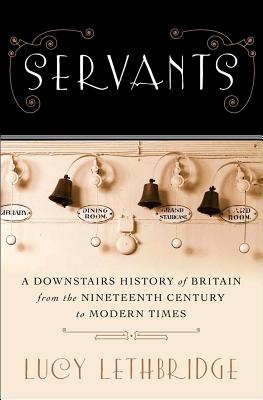 The vividly told lives of British servants and the upper crust they served.

From the immense staff running a lavish Edwardian estate and the lonely maid-of-all-work cooking in a cramped middle-class house to the poor child doing chores in a slightly less poor household, servants were essential to the British way of life. They were hired not only for their skills but also to demonstrate the social standing of their employers—even as they were required to tread softly and blend into the background. More than simply the laboring class serving the upper crust—as popular culture would have us believe—they were a diverse group that shaped and witnessed major changes in the modern home, family, and social order.


Spanning over a hundred years, Lucy Lethbridge?in this "best type of history" (Literary Review)?brings to life through letters and diaries the voices of countless men and women who have been largely ignored by the historical record. She also interviews former and current servants for their recollections of this waning profession.

At the fore are the experiences of young girls who slept in damp corners of basements, kitchen maids who were required to stir eggs until the yolks were perfectly centered, and cleaners who had to scrub floors on their hands and knees despite the wide availability of vacuum cleaners. We also meet a lord who solved his inability to open a window by throwing a brick through it and Winston Churchill’s butler who did not think Churchill would know how to dress on his own.

A compassionate and discerning exploration of the complex relationship between the server, the served, and the world they lived in, Servants opens a window onto British society from the Edwardian period to the present.

Lucy Lethbridge is the author of the highly praised Servants: A Downstairs History of Britain from the Nineteenth Century to Modern Times and Mind Your Manors: Tried-and-True British Household Cleaning Tips. She lives in London.

Praise For Servants: A Downstairs History of Britain from the Nineteenth Century to Modern Times…

Absorbing history, much of it in the words of servants…[Lethbridge’s] subject is many-branched and full of pressing issues.

Beautifully written, sparkling with insight, and a pleasure to read, Servants is social history at its most humane and perceptive.

In this excellent addition to the history of domestic service in the 20th century, Lucy Lethbridge has swept the existing archive and added new sources of her own. The result is a richly textured account of what it felt like to spend the decades of high modernity on your knees with a dustpan and brush.

As a panorama, Servants is a great success. Enthusiasts of bonnets and waistcoasts will find Upstairs Downstairs or Downton Abbey all the more enjoyable after reading this nuanced and elegantly written account of the wider context. And in tracing the history of servants throughout the whole of the 20th century, Lethbridge offers a new vantage point from which to reassess British social history.


Move over Downton Abbey, Lucy Lethbridge portrays life below stairs as it really was. Absorbing, highly entertaining, and impeccably researched, Servants is so much fun to read that it’s practically a guilty pleasure.

— Amanda Foreman, author of Georgiana and A World on Fire

Unlike the cozy downstairs world of Downton Abbey, most of those for whom the bell-pulls tolled in great British houses led existences of ceaseless drudgery and petty humiliation. Yet here Lucy Lethbridge re-creates the lives of everyone from butlers and housekeepers to 'tweenies' and 'skivvies' in a way that never fails to fascinate. With meticulous research and engaging prose she evokes a world that the plutocrats of America’s Gilded Age tried hard to emulate.

Lucy Lethbridge turns servants into stars, offering a colorful and compelling social history about the men, women, and children whose occupation rendered them invisible. Buoyed by substantial research, engaging anecdotes, and a lively narrative, the book places generations of overlooked domestics center stage, where, finally, they receive the attention they have always deserved.
— Deborah Davis, author of Strapless and Gilded

The panoramic view of the subject and Lethbridge’s engaging style and sharp observations make this book a valuable addition.
— Kathleen McCallister

A lively and complicating account of British social history seen through the eyes of the workers who made it possible.
— Andrea DenHoed

Vivid …. Household service provides Lethbridge with a window into almost every corner of social history.

Lethbridge captures the revolution with both sweep and intimacy, and never loses sight of the workers at its heart.

Lethbridge writes with sympathy about her subject…. Evenhanded to the end, [she] stresses the inherent dignity of domestic service.
— Matthew Price