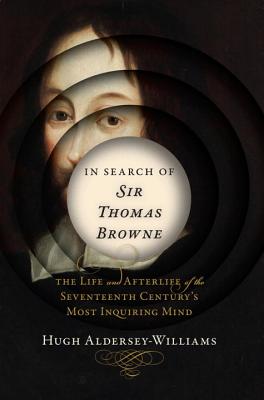 In Search of Sir Thomas Browne

The Life and Afterlife of the Seventeenth Century's Most Inquiring Mind

The extraordinary life and ideas of one of the greatest—and most neglected—minds in history.

Sir Thomas Browne (1605–1682) was an English writer, physician, and philosopher whose work has inspired everyone from Ralph Waldo Emerson to Jorge Luis Borges, Virginia Woolf to Stephen Jay Gould. In an intellectual adventure like Sarah Bakewell's book about Montaigne, How to Live, Hugh Aldersey-Williams sets off not just to tell the story of Browne's life but to champion his skeptical nature and inquiring mind.

Mixing botany, etymology, medicine, and literary history, Aldersey-Williams journeys in his hero's footsteps to introduce us to witches, zealots, natural wonders, and fabulous creatures of Browne's time and ours. We meet Browne the master prose stylist, responsible for introducing hundreds of words into English, including electricity, hallucination, and suicide. Aldersey-Williams reveals how Browne’s preoccupations—how to disabuse the credulous of their foolish beliefs, what to make of order in nature, how to unite science and religion—are relevant today.

In Search of Sir Thomas Browne is more than just a biography—it is a cabinet of wonders and an argument that Browne, standing at the very gates of modern science, remains an inquiring mind for our own time. As Stephen Greenblatt has written, Browne is "unnervingly one of our most adventurous contemporaries."

Praise For In Search of Sir Thomas Browne: The Life and Afterlife of the Seventeenth Century's Most Inquiring Mind…

Engaging and thoughtful…. Like some of the most compelling biographers, Aldersey-Williams partly inhabits his subject.
— Literary Review (UK)

Superb…. Aldersey-Williams has produced not a standard biography but a fascinating genre-bending melange of life story, medicine, science and human culture…. With luck this fine tribute will bring Browne the wider readership he richly deserves.
— Sunday Herald (UK)

This is just the kind of celebration Sir Thomas Browne needs and deserves: not a conventional biography but a meditation filled with intellectual curiosity, tolerance, humane observation, and gentle wit. It shows Browne as a man caught in the currents of his times while musing on timeless questions—and, like Aldersey-Williams, determined to weigh up the evidence without dogmatism, and to enjoy the richness of the world.
— Philip Ball

A wonderfully erratic, promenading book, in which we see how different, yet how similar we still are today to that most serene, most enigmatic science pioneer and literary master, Sir Thomas Browne, whose prose style is one of the highest peaks in English literature, according to Borges and to my humble self.
— Javier Marías

Hugh Aldersey-Williams is the author of many books, including The Tide, Anatomies, Periodic Tales, and The Most Beautiful Molecule, a finalist for the Los Angeles Times Book Prize. He lives in Norfolk, England.
Loading...
or support indie stores by buying on