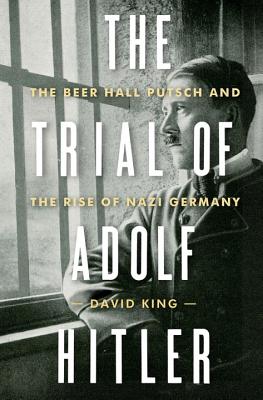 The Trial of Adolf Hitler

The Beer Hall Putsch and the Rise of Nazi Germany

The never-before-told story of the scandalous courtroom drama that paved the way for the rise of Adolf Hitler and the Nazi Party.

On the evening of November 8, 1923, the thirty-four-year-old Adolf Hitler stormed into a beer hall in Munich, fired his pistol in the air, and proclaimed a revolution. Seventeen hours later, all that remained of his bold move was a trail of destruction. Hitler was on the run from the police. His career seemed to be over.

The Trial of Adolf Hitler tells the true story of the monumental criminal proceeding that followed when Hitler and nine other suspects were charged with high treason. Reporters from as far away as Argentina and Australia flocked to Munich for the sensational four-week spectacle. By its end, Hitler would transform the fiasco of the beer hall putsch into a stunning victory for the fledgling Nazi Party. It was this trial that thrust Hitler into the limelight, provided him with an unprecedented stage for his demagoguery, and set him on his improbable path to power.

Based on trial transcripts, police files, and many other new sources, including some five hundred documents recently discovered from the Landsberg Prison record office, The Trial of Adolf Hitler is a gripping true story of crime and punishment—and a haunting failure of justice with catastrophic consequences.

Praise For The Trial of Adolf Hitler: The Beer Hall Putsch and the Rise of Nazi Germany…

Gripping....The Trial of Adolf Hitler provides a textbook example of how a determined demagogue can turn defeat into victory. It is also a disturbing portrait of how an advanced country can descend into chaos and of the human cost that this chaos entails.

As captivating as it is well researched and scholastically precise.
— The New Criterion

King affirms his reputation as a first-rate narrative historian in this well-researched....fast-paced account.
— Publishers Weekly

A powerful work that underlines what a pivot point the trial was—and how badly it went awry.
— Bookpage

A courtroom drama both farcical and ominous. An absorbing, detailed account of a crucial—but often overlooked—chapter in Hitler’s rise.
— Joseph Kanon, author of The Good German and Leaving Berlin

This is the definitive book on the Hitler trial in the English, German, or any language.
— Peter Ross Range, author of 1924: The Year That Made Hitler

David King is the New York Times best-selling author of Death in the City of Light, Vienna 1814, and The Trial of Adolf Hitler. He taught European history at the University of Kentucky, and lives in Lexington, Kentucky.
Loading...
or
Not Currently Available for Direct Purchase