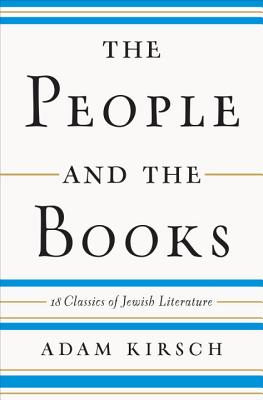 The People and the Books

An essential exploration of a rich literary tradition from the Bible to modern times, by a “rare literary authority” (New York Times Book Review) and “one of our keenest critics” (Washington Post).

Jews have long embraced their identity as “the people of the book.” But outside of the Bible, much of the Jewish literary tradition remains little known to nonspecialist readers. The People and the Books shows how central questions and themes of our history and culture are reflected in the Jewish literary canon: the nature of God, the right way to understand the Bible, the relationship of the Jews to their Promised Land, and the challenges of living as a minority in Diaspora. Adam Kirsch explores eighteen classic texts, including the biblical books of Deuteronomy and Esther, the philosophy of Maimonides, the autobiography of the medieval businesswoman Glückel of Hameln, and the Zionist manifestoes of Theodor Herzl. From the Jews of Roman Egypt to the mystical devotees of Hasidism in Eastern Europe, The People and the Books brings the treasures of Jewish literature to life and offers new ways to think about their enduring power and influence.

Praise For The People and the Books: 18 Classics of Jewish Literature…

[A]n astute and accessible introduction to 18 Jewish literary classics... [Kirsch's] laser focus on these works' most topical themes makes them feel so urgent that curious readers of any religious persuasion will want to read them all.
— Dara Horn - Wall Street Journal

Lucid,
vivid and likely to provide helpful instruction… [Kirsch] has, like Simon
Schama, a keen eye for the revelatory detail in discussing his historical
subjects.
— New York Times Book Review

Anyone
looking for a single-volume introduction to Jewish civilization… will find
nothing better in print… A deeply serious meditation on the meaning of Jewish
existence.

[A]n entertaining and enlightening review of eighteen classic works and,
at the same time, Judaism’s most important ideas and ideals. It deserves to be
on the Jewish bookshelf along with the eighteen books it opens for its reader.
— Jewish Book Council

Through profiles of eighteen indelible figures and chronicles...Adam Kirsch uncovers the unfailing excitements of a living, creative, and abiding civilization. And more: in this superbly clarifying panorama, he illumines how in the history of ideas Jews, despite so many permutations of approach, have faithfully adhered to a single sublime Idea.
— Cynthia Ozick

The people of the book are often unaware of the
books of their people. Kirsch opens, unfurls, and illuminates the great works
of Jewish tradition and history; he is our intellectual Sherpa, guiding us
sure-footedly through the heights.
— Rabbi David Wolpe, author of David: The Divided Heart

Luminous… The secret of the Jews, [Kirsch] shows, is found within these classic works. Anyone interested in penetrating that secret should read The People and the Books.

Adam Kirsch is the author of several books of poetry and criticism, including Who Wants to Be a Jewish Writer? and The People and the Books: Eighteen Classics of Jewish Literature. A 2016 Guggenheim Fellow, Kirsch is an editor at the Wall Street Journal’s Weekend Review section and has written for publications including The New Yorker and Tablet. He lives in New York.
Loading...
or
Not Currently Available for Direct Purchase