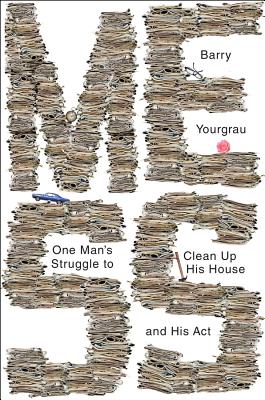 One Man's Struggle to Clean Up His House and His Act

Hilarious and poignant, a glimpse into the mind of someone who is both a sufferer from and an investigator of clutter.

Millions of Americans struggle with severe clutter and hoarding. New York writer and bohemian Barry Yourgrau is one of them. Behind the door of his Queens apartment, Yourgrau’s life is, quite literally, chaos. Confronted by his exasperated girlfriend, a globe-trotting food critic, he embarks on a heartfelt, wide-ranging, and too often uproarious project—part Larry David, part Janet Malcolm—to take control of his crammed, disorderly apartment and life, and to explore the wider world of collecting, clutter, and extreme hoarding.

Encounters with a professional declutterer, a Lacanian shrink, and Clutterers Anonymous—not to mention England’s most excessive hoarder—as well as explorations of the bewildering universe of new therapies and brain science, help Yourgrau navigate uncharted territory: clearing shelves, boxes, and bags; throwing out a nostalgic cracked pasta bowl; and sorting through a lifetime of messy relationships. Mess is the story of one man’s efforts to learn to let go, to clean up his space (physical and emotional), and to save his relationship.

Writer-performer Barry Yourgrau is the author of acclaimed books of brief fiction, including Wearing Dad's Head and The Sadness of Sex, in whose film version he starred. He’s appeared on MTV and NPR, and written for the New York Times, Huffington Post, Paris Review, and Vice, among others. Born in South Africa, he lives in New York and Istanbul.

Praise For Mess: One Man's Struggle to Clean Up His House and His Act…

A fascinating read by a hoarder about the psychology and culture of hoarding.

My favorite Bohemian unpacks his life, and his heart. I will never look at clutter the same way again. I love this book!
— Gary Shteyngart, author of Little Failure

Terrifically funny…. What can we say: Hoarders seem to be hot.

An absorbing look at a mysterious compulsion.

Barry Yourgrau is America’s Kafka, if Kafka were hysterically funny, weirdly relatable, and had just a little bit of a hoarding problem. Mess is a total Yourgrau feast—I wept with laughter (but then why couldn’t I throw away my Kleenex?).

— Sandra Tsing Loh, author of The Madwoman in the Volvo

A funny, smart, and moving memoir about the accumulation of STUFF: what it means to us, why we keep it, and how we deal with our personal ‘collections.’ (Great book, btw.)
— Roz Chast, author of Can't We Talk About Something More Pleasant?

If Richard Pryor and Lydia Davis shared a hoarder’s body, this is the memoir of that wild gorgeous being. A great literary mind gathers the whole world into his apartment and then, like a Grimm’s witch, tries to make it disappear.
— Clancy Martin, author of Love and Lies