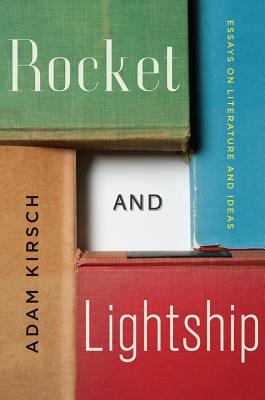 Essays on Literature and Ideas

A collection of essays from a “great poet-critic-intellectual” (Daily Beast).

Adam Kirsch has been described as "elegant and astute…[a] critic of the very first order" (Michiko Kakutani, New York Times). In these brilliant, wide-ranging essays, published over the last eight years in the New Republic, The New Yorker, and elsewhere, Kirsch shows how literature can illuminate questions of meaning, ethics, and politics, and how those questions shape the way we take pleasure in art. In Rocket and Lightship he examines the work and life of writers past and present, from intellectuals Susan Sontag, Hannah Arendt, and Walter Benjamin to novelists including E. M. Forster, David Foster Wallace, and Zadie Smith. Kirsch quotes G. M. Hopkins: "Nor rescue, only rocket and lightship, shone." So shines literature, in these unflinchingly bold and provocative essays—as an illuminating, regenerative, and immortalizing force.


Praise For Rocket and Lightship: Essays on Literature and Ideas…

“[Kirsch’s] rare literary authority is on full display…It’s a pleasure to be convoyed through Western literature by Kirsch, whose self-assuredness feels more like intellectual comfort than it does coercion.
— Alice Gregory - New York Times Book Review

It is fashionable today to mourn the paucity of public intellectuals in America. Meet Adam Kirsch, one of the very best literary/cultural critics writing today—a critic in the grand tradition of Edmund Wilson or Lionel Trilling. Rocket and Lightship is a delight to read.

Adam Kirsch is one of the best of our cultural and literary critics. Whether he is dispatching the repellent ideology of Slavoj Zizek or reappraising the literary legacy of E. M. Forster, he writes with stunning force and beautiful lucidity.
— Janet Malcolm

An adventurous critic and essayist of cascading impact… Kirsch’s smart and piquant essays articulate reasons “to be grateful for literature,” even as his whitewater title essay confronts us with the mad futility of our devotion to books.
— Donna Seaman - Booklist

One of the excitements of reading Kirsch on poetry is the sense that he still holds out this quixotic ambition for the form, never mind the current fashion.
— Christopher Beha - Harper's Magazine

Adam Kirsch is the author of several books of poetry and criticism, including Who Wants to Be a Jewish Writer? and The People and the Books: Eighteen Classics of Jewish Literature. A 2016 Guggenheim Fellow, Kirsch is an editor at the Wall Street Journal’s Weekend Review section and has written for publications including The New Yorker and Tablet. He lives in New York.
Loading...
or
Not Currently Available for Direct Purchase