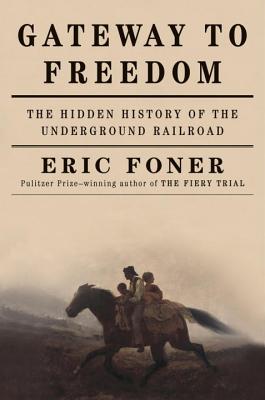 The Hidden History of the Underground Railroad

The dramatic story of fugitive slaves and the antislavery activists who defied the law to help them reach freedom.

More than any other scholar, Eric Foner has influenced our understanding of America's history. Now, making brilliant use of extraordinary evidence, the Pulitzer Prize–winning historian once again reconfigures the national saga of American slavery and freedom.

A deeply entrenched institution, slavery lived on legally and commercially even in the northern states that had abolished it after the American Revolution. Slaves could be found in the streets of New York well after abolition, traveling with owners doing business with the city's major banks, merchants, and manufacturers. New York was also home to the North’s largest free black community, making it a magnet for fugitive slaves seeking refuge. Slave catchers and gangs of kidnappers roamed the city, seizing free blacks, often children, and sending them south to slavery.

To protect fugitives and fight kidnappings, the city's free blacks worked with white abolitionists to organize the New York Vigilance Committee in 1835. In the 1840s vigilance committees proliferated throughout the North and began collaborating to dispatch fugitive slaves from the upper South, Washington, and Baltimore, through Philadelphia and New York, to Albany, Syracuse, and Canada. These networks of antislavery resistance, centered on New York City, became known as the underground railroad. Forced to operate in secrecy by hostile laws, courts, and politicians, the city’s underground-railroad agents helped more than 3,000 fugitive slaves reach freedom between 1830 and 1860. Until now, their stories have remained largely unknown, their significance little understood.

Building on fresh evidence—including a detailed record of slave escapes secretly kept by Sydney Howard Gay, one of the key organizers in New York—Foner elevates the underground railroad from folklore to sweeping history. The story is inspiring—full of memorable characters making their first appearance on the historical stage—and significant—the controversy over fugitive slaves inflamed the sectional crisis of the 1850s. It eventually took a civil war to destroy American slavery, but here at last is the story of the courageous effort to fight slavery by "practical abolition," person by person, family by family.


Praise For Gateway to Freedom: The Hidden History of the Underground Railroad…

Once again, Eric Foner as scholar shakes American history and alters as he also rebuilds one of its foundations. Making brilliant use of an extraordinary, little-known document, Foner, with his customary clarity, tells the enlightening story of the thousands of fugitive slaves who journeyed to freedom along the eastern corridor of the United States. Many stories of individual courage illuminate a network of operatives both formal and informal that played a powerful role in causing sectional conflict and the Civil War.
— David W. Blight, author of the forthcoming Frederick Douglass: A Life

Gateway to Freedom liberates the history of the underground railroad from the twin plagues of mythology and cynicism. The big picture is here, along with telling details from previously untapped sources. With lucid prose and careful analysis, Eric Foner tells a story that is at once unsparing and inspiring. For anyone who still wonders what was at stake in the Civil War, there is no better place to begin than Gateway to Freedom.

With remarkable new research and keen insight, Eric Foner vividly narrates stories of courage and resourcefulness by the men and women who helped antebellum slaves escape to freedom. Foner deftly illuminates the importance of the underground railroad in provoking southern leaders into issuing ultimatums that would culminate in civil war.
— Alan Taylor, author of The Internal Enemy

Foner’s gripping account of slaves’ struggles to free themselves reveals the immense risks they, and their sympathizers, took to escape bondage.
— Publishers Weekly

Excellent… Mr. Foner, bringing to bear his well-honed research skills and his deep knowledge of slavery and race relations… vividly describes the key part that New York City played in the operations of the Underground Railroad… he merits high praise for contributing sold information and thoughtful analysis to the history of this shadowy, extensive network.
— David S. Reynolds - Wall Street Journal

Bring[s] to bear the insights of a long and distinguished career writing about the Civil War and Reconstruction eras and a sharp sense of the ironies that involuntary servitude posed for a nation that proclaimed itself to be built on principles of liberty… highly readable.
— Michael D. Schaffer - Philadelphia Inquirer

Quite an accomplishment… this narrative is dramatic and compelling and certainly will provide readers with a deep understanding of the workings of the Underground Railroad.
— David Hugh Smith - Christian Science Monitor

Eric Foner has won a place in the front rank of American historians with books that seem to vacuum up all available sources to produce bold new interpretations of the country’s reckoning with the big questions of slavery and freedom.
— Jennifer Schuessler - New York Times

Intellectually probing and emotionally resonant, Gateway to Freedom reminds us that history can be as stirring as the most gripping fiction.

Tells a story that will surprise most readers…[a] compelling narrative.
— Adam Goodheart - The Atlantic

[Foner] carries the reader along, as if galloping through a valley of subterfuge and salvation that might also doom freedom at any time. Foner crucially delineates the profound challenge and existential risk that engulfed an interracial generation as the nation thundered toward dissolution, or Civil War.
— Kevin Lynch - Milwaukee Journal Sentinel

Will continue to be read as long as Americans, perilously free, journey north.
— Richard Kreitner - The Nation

Eric Foner is the author of many award-winning books on the Civil War and Reconstruction, including The Fiery Trial: Abraham Lincoln and American Slavery, winner of the Pulitzer Prize. He is DeWitt Clinton Professor Emeritus of History at Columbia University.