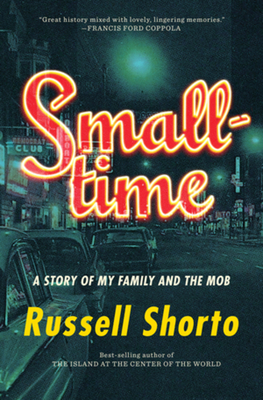 A Story of My Family and the Mob

Family secrets emerge as a best-selling author dives into the history of the mob in small-town America.

Best-selling author Russell Shorto, praised for his incisive works of narrative history, never thought to write about his own past. He grew up knowing his grandfather and namesake was a small-town mob boss but maintained an unspoken family vow of silence. Then an elderly relative prodded: You’re a writer—what are you gonna do about the story?

Smalltime is a mob story straight out of central casting—but with a difference, for the small-town mob, which stretched from Schenectady to Fresno, is a mostly unknown world. The location is the brawny postwar factory town of Johnstown, Pennsylvania. The setting is City Cigar, a storefront next to City Hall, behind which Russ and his brother-in-law, “Little Joe,” operate a gambling empire and effectively run the town.

Smalltime is a riveting American immigrant story that travels back to Risorgimento Sicily, to the ancient, dusty, hill-town home of Antonino Sciotto, the author’s great-grandfather, who leaves his wife and children in grinding poverty for a new life—and wife—in a Pennsylvania mining town. It’s a tale of Italian Americans living in squalor and prejudice, and of the rise of Russ, who, like thousands of other young men, created a copy of the American establishment that excluded him. Smalltime draws an intimate portrait of a mobster and his wife, sudden riches, and the toll a lawless life takes on one family.

But Smalltime is something more. The author enlists his ailing father—Tony, the mobster’s son—as his partner in the search for their troubled patriarch. As secrets are revealed and Tony’s health deteriorates, the book become an urgent and intimate exploration of three generations of the American immigrant experience. Moving, wryly funny, and richly detailed, Smalltime is an irresistible memoir by a masterful writer of historical narrative.


Praise For Smalltime: A Story of My Family and the Mob…

Russell Shorto’s Smalltime draws a convincing portrait of a time when Italian Americans weren’t permitted to live in certain neighborhoods or rise too high in the political firmament. This remembrance of his grandfather’s and great-uncle’s lives—of slots and pinball machines, ‘tip seals,’ ‘skeeched dice,’ and places like the Melodee Lounge and City Cigar—mixes great history and lovely, lingering memories: ‘Long conversations about spaghetti sauce and aunts who kissed you on the lips: those were the ways we were Italian.’

I read a lot of books for NPR's Fresh Air—Smalltime, the memoir by Russell Shorto about his grandfather, a mob boss in a Western PA steel town, is one of my favorites.

Shorto has produced something that feels altogether fresh, a street-level portrait of how his late grandfather helped build what amounted to a Mafia small business…Shorto is a terrific storyteller…few of his words are wasted, a delight these days.
— Wall Street Journal

An entertaining book about the Shorto clan intertwined with a history of the Italian mob, Sicilians in the U.S., and the rise and fall of Johnstown, a central Pennsylvania steel town…Ultimately, Smalltime does not pull any punches while telling its story. It’s strikingly personal, but also a peek into the uniqueness of the American experience.

Shorto finally turns a key in the proverbial locked drawer of his family's chest, only to find a web of mob figures waiting to tell their story….the story of his family's hidden figures vividly unfolds.
— Newsweek

With Smalltime, Shorto traces his decision to learn the truth about his family’s past, discover its long-buried secrets, and explore unforgotten slights and how decisions made decades and decades ago continue to leave their mark.

Shorto tells us the story of a small-town, smalltime mob, but, much more than that, the story of an American family over three generations. By turns tender, poignant, and unsparing.
— Kevin Baker, author of The Big Crowd

Russell Shorto is a magnificent writer and Smalltime is a delicious story. A world so vividly rendered, you will find it hard to leave.

— Tom Perrotta, author of The Leftovers and Mrs. Fletcher

Russell Shorto, one of our most celebrated narrative historians, is expert at mining history for fascinating gems, but here it’s as if he breaks through into his own heart.
— Francisco Goldman, author of Say Her Name

A compelling memoir, one that reads with the forward momentum of a good novel. A splendid book in every way.
— Jay Parini, author of Borges and Me

Written with a keen ear for the darkly humorous inflections of Italian American speech, Shorto’s story of a small-town USA mobster, his grandfather, ought to change forever how we think about the mafia. La Cosa Nostra flourished not only in big cities but across the continent, wherever there were mines and factories, as much a part of the post–World War II industrial boom as smokestacks, union bosses, and big cars with fins. Smalltime is also a deeply personal and moving reflection on the bonds between Italian American grandfathers, fathers, and sons. Beautifully written, brilliantly researched, Smalltime establishes itself immediately as a classic of the Italian American experience.

— Robert A. Orsi, professor of religious studies and history, Northwestern University, and author of The Madonna of 115th Street: Faith and Community in Italian Harlem, 1880–1950

This immersive, poignant memoir reminds us all to question the stories and myths we’ve grown up with. These pages are both gritty and elegiac, tense and tender, embodying the contradictions at the heart of all families. A deeply satisfying read.
— Christopher Castellani, author of Leading Men

Part memoir, part narrative history rich in mesmerizing detail, at the heart of Smalltime is the abiding love the author clearly holds for his colorful and flawed Sicilian immigrant family, one that looks so very much like the American family. I could not put this book down, and you won’t be able to either.

Russell Shorto is the best-selling author of The Island at the Center of the World, Amsterdam, and Revolution Song, and a contributing writer at the New York Times Magazine. He lives in Cumberland, Maryland.
Loading...
or support indie stores by buying on