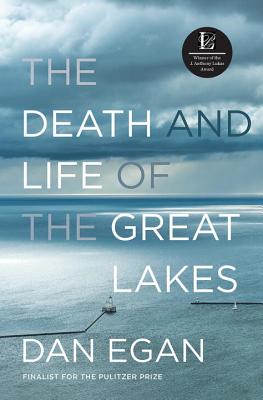 The Death and Life of the Great Lakes

The Great Lakes—Erie, Huron, Michigan, Ontario and Superior—hold 20 percent of the world’s supply of surface fresh water and provide sustenance, work and recreation for tens of millions of Americans. But they are under threat as never before, and their problems are spreading across the continent. The Death and Life of the Great Lakes is prize-winning reporter Dan Egan’s compulsively readable portrait of an ecological catastrophe happening right before our eyes, blending the epic story of the lakes with an examination of the perils they face and the ways we can restore and preserve them for generations to come.


Praise For The Death and Life of the Great Lakes…

Dan Egan’s deeply researched and sharply written The Death and Life of The Great Lakes…nimbly splices together history, science, reporting and personal experiences into a taut and cautiously hopeful narrative…Egan’s book is bursting with life (and yes, death).

Engaging…[and] impeccably researched…Told like a great story rather than an academic lecture.
— Anna M. Michalak - Nature

Living up to . . . early acclaim, [The Death and Life of the Great Lakes] is easy to read, offering well-paced, intellectually stimulating arguments, bolstered by well-researched and captivating narratives.

An accessible, even gripping narrative about the massive, unforeseen costs of our interventions in the natural world. . . . The Death and Life of the Great Lakes is an engaging, vitally important work of science journalism.

— Eva Holland - The Globe and Mail

The Death and Life of the Great Lakes reads like a mystery. . . . Egan knows how to pare a story to its most interesting elements. Having finished the book, I immediately started over.

Dan Egan has done more than any other journalist in America to chronicle the decline of this once-great ecosystem, to alert the public to new threats, and to force governments to take remedial action.
— Grantham Prize for Excellence in Reporting on the Environment, Special Merit citation

Dan Egan is the author of New York Times bestseller The Death and Life of the Great Lakes. A two-time finalist for the Pulitzer Prize and winner of the Los Angeles Times Book Prize, he lives in Milwaukee, Wisconsin, with his wife and children.
Loading...
or
Not Currently Available for Direct Purchase