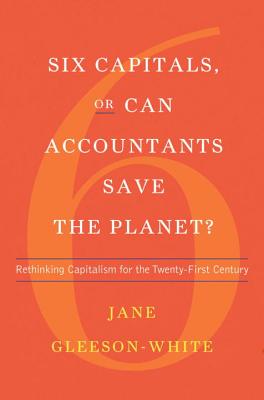 Six Capitals, or Can Accountants Save the Planet?

Rethinking Capitalism for the Twenty-First Century

A timely and fascinating account of the revolution going on in the world of finance from the acclaimed author of Double Entry.

This is the story of a twenty-first-century revolution being led by the most unlikely of rebels: accountants. Only the second revolution in accounting since double-entry bookkeeping began, it is of seismic proportions, driven by the 2008 financial crash and our ongoing environmental crisis. The changes it will wreak are profound and far-reaching and not only will transform the way the world does business but also will alter the nature of capitalism.

While the wealth of nations and corporations has been vital to the global economy, increasingly the world is coming to realize that such endless growth is limited by the earth's resources and comes at a huge price to the planet and to human well-being. It simply cannot be sustained.

This revolution demands that we go beyond merely accounting for traditional financial and industrial capital and take account of the benefits and detriments to the natural world and society. It urges us to include four new categories of wealth: intellectual (such as intellectual property), human (skills, productivity, and health), social and relationship (shared norms and values), and natural (environment). Making them part of our financial statements and GDP figures may be the only way to address the many calamities we face.

Just two years ago this revolution seemed idealistic and unlikely. Today it is quickly unfolding. In 2012, the sea-change year, two key initiatives took root: an international movement to transform how corporate accounting is calculated and the rise of incorporating the effects on the environment to the accounting of national and global economies. Six Capitals tells the story of this coming new age in capitalism, evaluating its promise and the disaster that lies ahead if it is not implemented.

Jane Gleeson-White is the author of Double Entry: How the Merchants of Venice Created Modern Finance, which won the 2012 Waverley Library Award for Literature. Gleeson-White has degrees in economics and literature from the University of Sydney.
Loading...
or
Not Currently Available for Direct Purchase