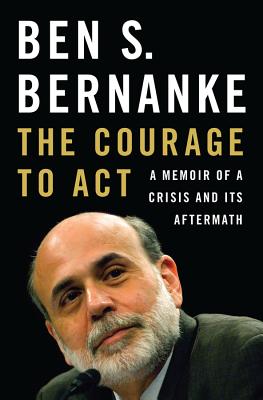 The Courage to Act

An unrivaled look at the fight to save the American economy.


Praise For The Courage to Act: A Memoir of a Crisis and Its Aftermath…

Revelatory…the book sheds light on many of the smaller dramas that hang over this crucial period of world economic history.
— New York Times

Undoubtedly the best account we will ever have of how government and financial institutions dealt with what has come to be known as the Great Recession.
— New York Times Book Review

A careful, detailed, and exceptionally clear justification for the Fed’s aggressive actions to avert another Great Depression and resuscitate the American economy.
— Washington Post

Bernanke’s insights are instructive about what went wrong and how to keep it from happening again.
— Los Angeles Times

A fantastic and reasonably accessible introduction to the economic thought of a former Federal Reserve Chair.
— Vox

A fascinating account of the effort to save the world from another catastrophe [like the Great Depression]…. Under Bernanke’s chairmanship, the Fed, whatever its pre-crisis mistakes, helped save the U.S. and the world from a disaster. Humanity should be grateful.
— Martin Wolf - The Financial Times

Ben S. Bernanke served as chairman of the Federal Reserve from 2006 to 2014. He was named Time magazine's "Person of the Year" in 2009. Prior to his career in public service, he was a professor of economics at Princeton University.
Loading...
or
Not Currently Available for Direct Purchase