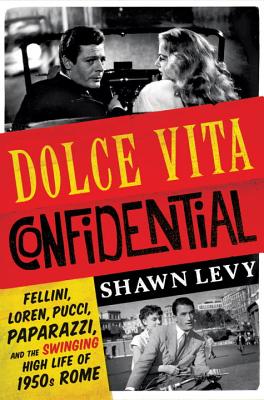 A romp through the worlds of film, fashion, and titillating journalism that made 1950s Rome the sexiest city on the planet.

From the ashes of World War II, Rome was reborn as the epicenter of film, fashion, creative energy, tabloid media, and bold-faced libertinism that made “Italian” a global synonym for taste, style, and flair. A confluence of cultural contributions created a bright, burning moment in history: it was the heyday of fashion icons such as Pucci, whose use of color, line, and superb craftsmanship set the standard for women’s clothing for decades, and Brioni, whose confident and classy creations for men inspired the contemporary American suit. Rome’s huge movie studio, Cinecitta, also known as “Hollywood-on-the Tiber,” attracted a dizzying array of stars from Charleton Heston, Gregory Peck, Audrey Hepburn, Ava Gardner, and Frank Sinatra to that stunning and combustible couple, Elizabeth Taylor and Richard Burton, who began their extramarital affair during the making of Cleopatra. And behind these stars trailed street photographers—Tazio Secchiarioli, Pierluigi Praturlon, and Marcello Gepetti—who searched, waited, and pounced on their subjects in pursuit of the most unflattering and dramatic portraits of fame.

Fashionistas, exiles, moguls, and martyrs flocked to Rome hoping for a chance to experience and indulge in the glow of old money, new stars, fast cars, wanton libidos, and brazen news photographers. The scene was captured nowhere better than in Federico Fellini’s masterpiece, La Dolce Vita, starring Marcello Mastroianni and the Swedish bombshell Anita Ekberg. It was condemned for its licentiousness, when in fact Fellini was condemning the very excess, narcissism, and debauchery of Rome’s bohemian scene.

Gossipy, colorful, and richly informed, Dolce Vita Confidential re-creates Rome’s stunning ascent with vivid and compelling tales of its glitterati and artists, down to every last outrageous detail of the city’s magnificent transformation.

"In a brisk, frothy narrative....Levy has a passion for mid-century Italian cinema and is at his best when writing about its giants."
— The Wall Street Journal

Uproariously readable....[Levy] tells some terrific, if dreadful, stories about the convergence of noblemen and actresses....He is a master of the group biography, pacing his chapters for maximum suspense and revelation....The climactic story is a humdinger....Wickedly readable.
— The Sunday Times

Levy recounts with enthusiasm and colour....the excitement of that time and place in a prose style that is teeming with satisfying gossipy details.
— The Guardian

Dolce Vita Confidential is so much fun that after a few pages you’ll want to set it aside, tie on a chic little scarf, jump on a Vespa, and cry 'ciao' as you buzz past corner cafes and flower stands.

This is an exciting account of a revolution in art and society.
— The Spectator

"Levy’s research is deep and his details are revealing....[he] chronicles Fellini and Mastroianni’s collaboration with insight and affection."
— Newsday

Shawn Levy has composed an exuberant portrait of postwar Rome and the filmmakers, movie stars, fashion designers, journalists, and paparazzi whose supreme hunger, energy, and creativity transformed it into the most stylish city in the world. He brings an infectious and freewheeling enthusiasm to every page as he reintroduces us to the extravagant romanticism of fast cars, reckless hedonism, and beautiful people behind the resurrection of the Eternal City.
— Glenn Frankel, author of The Seachers: The Making of an American Legend

Shawn Levy is a former film critic for The Oregonian and the best-selling author of Rat Pack Confidential and Paul Newman: A Life. He reviews movies for KGW-TV and lives in Portland, Oregon.
Loading...
or
Not Currently Available for Direct Purchase