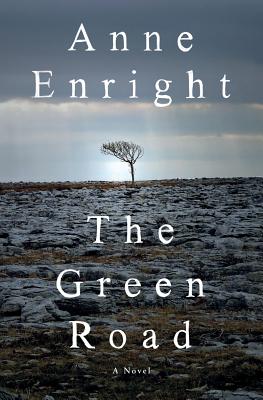 “Steeped in the moist earth of Ireland, this is the story of the Madigan family and the life that forces them apart, only to return again to a home filled with memories. Rosaleen suffers greatly at the loss of her four children - not to death, but to lives of their own: her eldest to New York, another to Mali, one daughter to a hospital career, and another to the 'big city' of Dublin. The concept of 'family' still holds them together despite years and circumstances, and as Rosaleen announces plans to sell the family home, a last Christmas gathering proves profound.”
— Linda Bond, Auntie's Bookstore, Spokane, WA
View the List

Longlisted for the 2015 Man Booker Prize.

From internationally acclaimed author Anne Enright comes a shattering novel set in a small town on Ireland's Atlantic coast. The Green Road is a tale of family and fracture, compassion and selfishness—a book about the gaps in the human heart and how we strive to fill them.

Spanning thirty years, The Green Road tells the story of Rosaleen, matriarch of the Madigans, a family on the cusp of either coming together or falling irreparably apart. As they grow up, Rosaleen's four children leave the west of Ireland for lives they could have never imagined in Dublin, New York, and Mali, West Africa. In her early old age their difficult, wonderful mother announces that she’s decided to sell the house and divide the proceeds. Her adult children come back for a last Christmas, with the feeling that their childhoods are being erased, their personal history bought and sold.

A profoundly moving work about a family's desperate attempt to recover the relationships they've lost and forge the ones they never had, The Green Road is Enright's most mature, accomplished, and unforgettable novel to date.

Praise For The Green Road: A Novel…

Enright possesses an unusual combination of talents. She is a rich, lyrical prose writer, who cascades among novelties--again and again, she finds the unexpected adjective, the just noun.
— James Wood - The New Yorker

With language so vibrant it practically has a pulse, Enright makes an exquisitely drawn case for the possibility of growth, love and transformation at any age.
— People

Impressive…Enright writes with authority and confidence…Though stories end, The Green Road seems to say, the lives of the people who inhabit them go on.

Enright…is a master of emotional excavation. …Through her wise and majestic book, [she] shows us the beauty even in life’s harsh terrain.
— Karen E. Bender - O Magazine

A rich, capacious story, buoyed by tender humor…. The Green Road…offers a survey of Enright’s magnificent dexterity…. There’s nothing she can’t do with perspective, tone and time.

A book of brawny prose sheathed in cool intelligence.
— The Economist

Enright, newly crowned as the first Irish Fiction Laureate, has her own distinctive voice. She is witty, sharp, profound, perceptive and often very funny as she slyly undercuts her characters’ self-deceptions.
— Sue Gaisford - Financial Times

This looping story of four siblings coping differently with the smothering embrace of their amusingly melodramatic mother…may be even better than its close cousin, The Gathering, which won the 2007 Booker prize. As locales shift from a stubby Irish village to AIDS-ravaged gay Manhattan and famine-torn Mali, so do the tone and point of view, over which Enright exercises perfect control.

Hugely readable…. The Green Road should confirm Enright’s status as one of our greatest living novelists.

All of the children move out of Rosaleen’s orbit and

establish their own lives elsewhere. How does their

Rosaleen writes distinct Christmas cards to each of her

children. What does her card to each child tell you about

their relationship? What do the cards tell you about her?

After Dan announces his decision to become a priest, Rosaleen says, “I

What role does dislike play in her relationship with Dan?

Enright writes, “Emmet . . . was drawn to suffering—it was, after all,

his job” (page106). Is his interest in suffering heroic or self-absorbed?

Dan, Hanna, Constance, and Emmet all have aspects of their private

lives that they do not share with one another. What do they hide from

one another, and why?

required” (page 249). From Dan during the AIDS crisis in New York to

Rosaleen on the green road, how are helplessness and love portrayed

as related in the novel?

Toward the end of the novel, Enright describes Rosaleen on the green

road: “there were gaps between things, and this frightened her. This

is where Rosaleen was now. She had fallen into the gap” (page 266).

Pat Madigan is largely absent throughout the narrative. How does his

is compassion. How do members of the Madigan family show

compassion to one another?

Of Rosaleen, Enright writes, “her life was one of great harmlessness”

novel. How have Rosaleen’s children chased, established, or resisted

establishing their own homes?