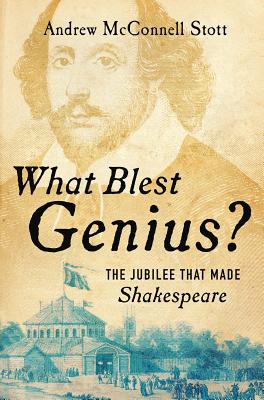 The Jubilee That Made Shakespeare

The remarkable, ridiculous, rain-soaked story of Shakespeare’s Jubilee: the event that established William Shakespeare as the greatest writer of all time.

In September 1769, three thousand people descended on Stratford-upon-Avon to celebrate the artistic legacy of the town’s most famous son, William Shakespeare. Attendees included the rich and powerful, the fashionable and the curious, eligible ladies and fortune hunters, and a horde of journalists and profiteers. For three days, they paraded through garlanded streets, listened to songs and oratorios, and enjoyed masked balls. It was a unique cultural moment—a coronation elevating Shakespeare to the throne of genius.

Except it was a disaster. The poorly planned Jubilee imposed an army of Londoners on a backwater hamlet peopled by hostile and superstitious locals, unable and unwilling to meet their demands. Even nature refused to behave. Rain fell in sheets, flooding tents and dampening fireworks, and threatening to wash the whole town away.

Told from the dual perspectives of David Garrick, who masterminded the Jubilee, and James Boswell, who attended it, What Blest Genius? is rich with humor, gossip, and theatrical intrigue. Recounting the absurd and chaotic glory of those three days in September, Andrew McConnell Stott illuminates the circumstances in which William Shakespeare became a transcendent global icon.


Praise For What Blest Genius?: The Jubilee That Made Shakespeare…

Vivacious... Garrick’s Jubilee of 1769 runs the Fyre Festival of 2017 close for overambition, chaotic planning and near disaster... Stott quotes Boswell’s enthusiasm for Garrick’s acting by saying that he made ‘particles of vivacity’ dance within him ‘by a sort of contagion.’ The same compliment is owed to Stott for the manner in which he tells this eccentric story.
— Dominic Dromgoole - New York Times Book Review

Yes, Shakespeare’s genius is in the work. But in this sprightly volume, Andrew McConnell Stott argues that an eighteenth-century publicity stunt of a weekend—improvised, outsized, and in many ways absurd—put the playwright on the map. Stott's revel sparkles, even in the teeming rain.
— Stacy Schiff, Pulitzer Prize–winning author of Véra (Mrs. Vladimir Nabokov) and The Witches

A glorious, hilarious romp through the events of the three-day literary extravaganza of 1769 that made Shakespeare a household name and put Stratford-upon-Avon on the tourist trail. Zestful and witty, while positively bursting with anecdotes, insights and tales of theatrical and sexual derring-do. Once I’d started reading, I couldn’t put it down.
— John Guy, author of Mary Queen of Scots

It was to be the spectacle that would transform the Bard from cultural icon to secular saint of English literature, and make actor (and self-promoter) David Garrick’s name inseparable from that of William Shakespeare’s…With humor and meticulously researched detail, Andrew McConnell Stott takes us on the circuitous and muddy road from idea to realization of the first Shakespeare Jubilee. His gentle prose makes us feel like we are being let in on inside secrets, preparing us for a comical and surprising denouement.
— Andrea Mays, author of The Millionaire and the Bard

A meticulous, sharply observed, and often funny account of the great Shakespeare Jubilee of 1769, a celebration largely responsible—despite various mishaps—for the notion of semi-divine ‘bardic’ genius which still encumbers him today.
— Charles Nicholl, author of The Lodger Shakespeare: His Life on Silver Street

Written with all the verve and wit as befits the subject and the age, Andrew McConnell Stott’s What Blest Genius? dives headlong into one of the more bizarre events of the eighteenth century—the Stratford-upon-Avon Shakespeare Jubilee of 1769. With a cast including the actor David Garrick, the memoirist James Boswell, and the ghost of Shakespeare himself, Stott elucidates how and why this place and time staged the real genesis of the Shakespeare ‘industry’ and the nascence of a cultural icon—borne, comically enough, out of the chaos of the world’s first literary festival.

A marvelous account of the world's first literary festival... Stott chronicles in luscious detail the ups and downs of the [Jubilee]... A thoroughly enjoyable and engaging literary history.
— Kirkus (starred review)

Andrew McConnell Stott is the author of four books. The recipient of the Royal Society of Literature/Jerwood Award for Non-Fiction, he is professor of English at the University of Southern California and lives in Los Angeles.
Loading...
or
Not Currently Available for Direct Purchase