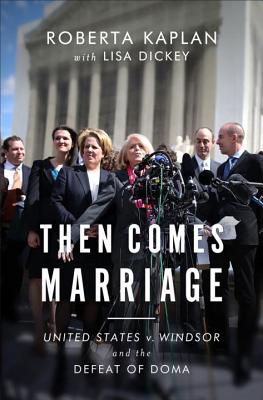 United States v. Windsor and the Defeat of DOMA

Roberta Kaplan’s gripping story of her defeat of the Defense of Marriage Act (DOMA) before the Supreme Court.

Renowned litigator Roberta Kaplan knew from the beginning that it was the perfect case to bring down the so-called Defense of Marriage Act (DOMA). Edie Windsor and Thea Spyer had been together as a couple, in sickness and in health, for more than forty years—enduring society’s homophobia as well as Spyer’s near total paralysis from multiple sclerosis. Although the couple was finally able to marry, when Spyer died the federal government refused to recognize their marriage, forcing Windsor to pay a huge estate tax bill.

In this gripping, definitive account of one of our nation’s most significant civil rights victories—named a Ms. Magazine Top 10 Feminist Book of 2015 and a National Law Journal Top 10 Supreme Court Aficionado Book of 2015—Kaplan describes meeting Windsor and their journey together to defeat DOMA. She shares the behind-the-scenes highs and lows, the excitement and the worries, and provides intriguing insights into her historic argument before the Supreme Court. A critical and previously untold part of the narrative is Kaplan’s own personal story, including her struggle for self-acceptance in order to create a loving family of her own.

Then Comes Marriage tells this quintessentially American story with honesty, humor, and heart. It is the momentous yet intimate account of a thrilling victory for equality under the law for all Americans, gay or straight.


Praise For Then Comes Marriage: United States v. Windsor and the Defeat of DOMA…

United States v. Windsor was a landmark ruling, and the case’s architect, Roberta Kaplan, emerged as a true American hero. Then Comes Marriage is a riveting account of a watershed moment in our history, and the strategy, ingenuity, and humanity that made it happen.

I thought I knew the Windsor case chapter-and-verse. As if! Then Comes Marriage will forever change the understanding of this landmark case—its genesis, its outside-the-box strategy, and its tactical brilliance. This is the can’t-put-down, emotional, funny, essential explanatory text that makes sense of Windsor, not just as law but as life.

Roberta Kaplan makes questions of constitutionality and the intricacies of legal strategy read like a John Grisham thriller. Then Comes Marriage explains how we arrived at this surprising moment in history, but it’s also a testament to the persuasive, transformative power of a good story.

— Alison Bechdel, author of Dykes to Watch Out For and Fun Home

A fast-paced, engaging account…. Kaplan breaks down the legal and procedural issues for nonlawyers and preserves suspense even where we know the outcome.
— Jeffrey S. Trachtman - Huffington Post

[A] scintillating read…. [Kaplan and Dickey] weave a fascinating narrative that gives the reader an insight into one of the Supreme Court’s most provocative cases…. This book deserves a place on everyone’s shelf.
— Joan M. Burda - New York Journal of Books

Along with detailing her legal strategy in the lower courts, Kaplan weaves her own coming-out story and her personal relationship into the story of her clients Edie Windsor and Thea Spyer…provid[ing] a revealing juxtaposition of how two very different generations of lesbians wrestled with the social attitudes of their times. It’s a timely, well-told story, brimming with observations about the importance of family…. Kaplan’s rallying cry, ‘It’s all about Edie, stupid,’ keeps the stories of two remarkable women at the center of this historic legal and human drama.
— Publishers Weekly, Starred review

This book tells all. Two great love stories (Robbie and Rachel, Thea and Edie), the trial, and all the internal struggles. It was so interesting and well-written that I could not stop reading it.
— Robin Tyler - The Advocate

Roberta Kaplan is a partner at Paul, Weiss, Rifkind, Wharton & Garrison LLP. Since winning United States v. Windsor, she litigated the case against the gay marriage ban in Mississippi and filed “The People’s Brief” in the Supreme Court case of Obergefell v. Hodges. She lives in New York City with her wife and son.
Loading...
or
Not Currently Available for Direct Purchase